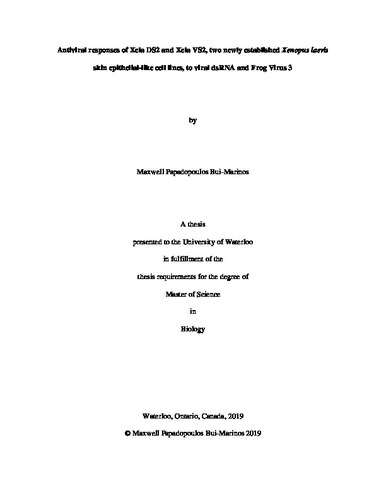 There is a current decline in amphibian populations, wherein the emerging pathogen Frog Virus 3 (FV3) is believed to be a proximate cause. The conservation of frog species is thus important as population declines would yield drastic ecological and environmental impacts. Frog skin is an important interface between the frog’s external environment and internal milieu and is the first line of defence against pathogen insult. In mammalian models, the skin epithelial layer acts as an important immunological barrier against pathogens and is capable of recognizing and responding to pathogen-associated molecular patterns (PAMPs) and signal to underlying cells that a threat is present. However, the ability and role of frog skin epithelial cells in recognizing and responding to viral PAMPs and FV3 is unknown. To address this, two cell lines from the dorsal skin (Xela DS2) and ventral skin (Xela VS2) of the African clawed frog (Xenopus laevis) were established. Xela DS2 and Xela VS2 were first characterized then used as models to determine whether frog skin epithelial cells exhibit the ability to sense and respond to extracellular dsRNA. Xela DS2 and Xela VS2 cells have an epithelial-like morphology, express genes associated with epithelial cells, and lack beta-galactosidase associated senescence activity. Cells grew optimally in 70% Leibovitz’s L-15 medium supplemented with 15% fetal bovine serum at 26°C. Upon treatment with poly(I:C), an analogue for viral dsRNA and known type I interferon (IFN) inducer, Xela DS2 and Xela VS2 exhibited marked upregulation of key antiviral and proinflammatory transcripts, including Type I IFN and the interferon stimulated gene (ISG), protein kinase R (PKR). This suggests that frog skin epithelial cells may participate in the recognition of extracellular dsRNA and production of local inflammatory signals similar to mammalian models. Once Xela DS2 and Xela VS2 were established as suitable models for the study of frog skin epithelial cell immunity, they were utilized to better understand the FV3-frog skin epithelial cell interaction. Xela DS2 and Xela VS2 are permissive to FV3 infection and support viral replication as seen by the detection of viral transcripts and increase in viral particles released from infected cells over time. The loss of cellular adherence in response to FV3 is a characteristic cytopathic effect (CPE) in Xela DS2 and Xela VS2. Xela DS2 and Xela VS2 appear incapable of initiating antiviral or proinflammatory programs following infection with FV3 or challenge with UV-inactivated FV3, suggesting that FV3 is likely capable of immunoevasion in these cells. Nonetheless, pre-treatment of Xela DS2 and Xela VS2 with poly(I:C) followed by FV3 challenge was able to completely abrogate FV3-induced CPE and limit viral replication. This data demonstrates that despite FV3 being well equipped with immunoevasive strategies and mechanisms for total shutdown of host macromolecular synthesis, FV3 is unable to break an antiviral state in frog skin epithelial-like cell lines. Overall, Xela DS2 and Xela VS2 are currently the only known frog skin epithelial-like cell lines capable of sensing and responding to viral PAMPs and FV3. Cell line properties, such as plasticity in temperature growth and response to external stimuli, demonstrate that they are excellent models for the in vitro study of impacts from environmental stressors (e.g. pathogen insult, contaminants, temperature, etc.) on frog skin epithelial cells. Their ability to sense and respond to extracellular stimuli will also be useful in further elucidating host-pathogen interactions. With the demonstration that FV3 is unable to break an induced antiviral state in Xela DS2 and Xela VS2, we can now begin to further investigate methods and mechanism of mitigating FV3 infection at the skin epithelial barrier.