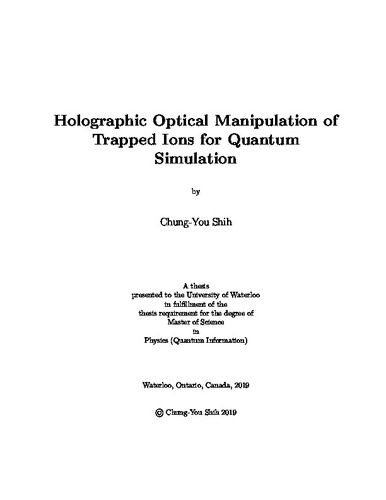 Trapped ion is one of the leading platforms for quantum simulation experiment due to its long coherence time and high fidelity state initialization, detection, and manipulation. To individually address ions at a single-ion level, it requires sophisticated optical engineering. In the thesis, we present a novel single qubit addressing system that is immune to imperfections of optical imaging and can scale to different size of the system. The technique is based on digital light processing with a commercially available digital micro-mirror device (DMD). A DMD is a 2D array that consists of tiny micro-mirrors that can be individually manipulated. It is commonly used in movie projectors to modulate the intensity of the light to create the desired image. However, using this technology to ions will require more sophisticated controls over optical wavefronts of the laser beams, for example, the necessity to manipulate the optical phase. It can be achieved by using the DMD as a programmable hologram, which can then be used to characterize and compensate for any imaging imperfections as well. We developed a new iterative Fourier transform algorithm (IFTA) for calculating the holograms. In the simulation, our algorithm shows more than one order of magnitude improvement in accuracy comparing to previously proposed algorithms. We experimentally demonstrated this holographic beam shaping technique with the optical aberration being compensated. The laser we used in the experiment is in the ultraviolet (UV) regime that is close to the optical transition used for manipulating $^{171}\mathrm{Yb}^+$ qubits. The short wavelength makes it more susceptible to environmental disturbance. Also, we proposed and experimentally demonstrated a new scheme that enables holographic controls over lights with multiple laser frequencies simultaneously by combing the DMD with an acousto-optical modulator (AOM). The AOM splits the light and illuminates different zones of the DMD. Each zone has its own hologram forming one frequency channel for addressing. This opens the possibility to engineer more complex Hamiltonian for quantum simulation. For example, we can engineer arbitrary spin-spin interaction graphs by applying the M\o lmer-S\o rensen scheme on this new setup.