The Effect of Shock Metamorphism on Zircon of the Huronian Supergroup in proximity to the Sudbury Impact, Ontario, Canada 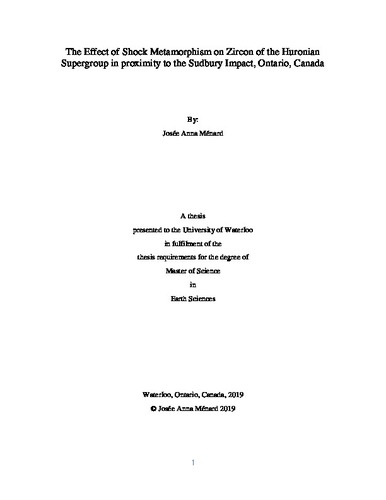 U-Pb geochronology of zircon is a widely used tool, but damage to the crystal lattice of zircon and loss of Pb by impact-related shock metamorphism can affect the interpretation of U-Pb isotope data. Five samples of the Huronian Supergroup (HSG), a transitional rift to passive margin sedimentary sequence of siliciclastic rocks deposited at 2.45 – 2.22 Ga, were collected for U-Pb detrital zircon geochronology from the Matinenda, McKim, Ramsay Lake and Mississagi Formations at varying distances from the Sudbury Igneous Complex (SIC). LA-ICP-MS is used to take repeat U-Pb analyses of individual zircon at varying distances from the edge of the remnant of the SIC. A sample of the Ramsay Lake Formation sampled 4.4 km away from the outer edge of the SIC, described by Menard (2017), contains an anomalously young detrital zircon population (n=13/49) 2590 – 2480 Ma. Individual grains from this population were reanalyzed with 2-12 data points analyzed per zircon. BSE and CL images of the grains did not show any evidence of differential growth events which could cause single grains to contain different age domains. U/Pb ages for these grains could not be reproduced and had elevated discordance, errors and mean square weighted deviation (MSWD) values, consistent with Pb-loss. Some grains appear to have been partially reset by the Sudbury impact, as discordant analyses trend along a discordia line with the impact event at 1850 Ma. Therefore, the 2590 – 2480 Ma population of grains represent Pb-loss ages between their crystallization ages and the impact event. These results imply that, deformation related to the Sudbury impact has preferentially affected the grains of this population, which have suffered more Pb mobility, leading to a false young 207Pb/206Pb ages. The 2590-2480 Ma population is compared to the main population of the same sample. Data from the main population have lower MSWD values and ages remain reproducible within error of the analytical technique. This observation demonstrates that distance from the impact is not the sole factor affecting the reaction of individual zircon to shock metamorphism because within a sample not all of the zircon suffer the same degree of uncertainty. Samples were taken from the Elliot Lake area, approximately 90 km away from the Sudbury Igneous Complex to control for potential effects of the Sudbury impact. As expected, the overall sample discordance, uncertainty and MSWD values for the zircon from Elliot Lake is much lower, indicating that as a first order of approximation, distance is the most dominant factor affecting Pb-loss in zircon on a kilometer scale. But, within the shatter cone limit of an impact, factors other than distance also affect the percent of discordant grains within a sample and Pb-loss within zircon. Overall, the effect of the Sudbury impact is more far reaching and may have disrupted U/Pb systems much farther than previously estimated.

Josee Menard (2019). The Effect of Shock Metamorphism on Zircon of the Huronian Supergroup in proximity to the Sudbury Impact, Ontario, Canada. UWSpace. http://hdl.handle.net/10012/15171