Experimental analysis of coherent structures in a plane confined jet 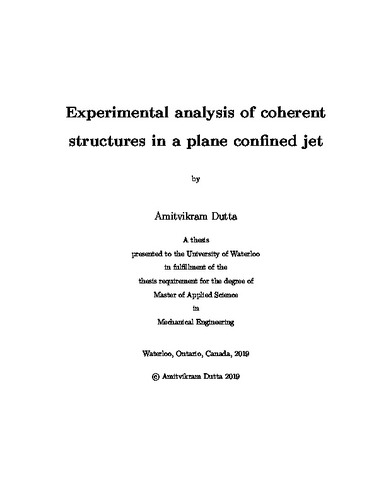 Confined jets are commonly employed in several industrial applications such as propul-sion systems in the aerospace industry and environmental control systems. In the presentstudy, the flow development of a high aspect ratio, planar confined jet is studied. Thevelocity field is measured using time-resolved, two-component, Particle Image Velocimetry. The study focuses on the differences in flow development with respect to coherent structures formed in the jet shear layer between an unconfined jet and a confined jet at two confinement ratios (CR) of 7 and 5. All three cases were investigated at a Reynolds number of 3800 based on jet exit height and centreline velocity. For all cases examined,primary vortices form downstream of the jet exit, due to the amplification of perturbations in the shear layer. The Strouhal number corresponding to the initial vortex sheddingfrequency is relatively unchanged between the confined and unconfined cases at around St = 0.67. The perturbations associated with this non-dimensional frequency grow exponentially downstream, saturate and then decay. For the unconfined case, this saturation takes place at 1.8 jet slot heights (h) downstream. For the confined cases, the spatial growthrate of fluctuations is lower, and the perturbations saturate at 3.1hand 3.7hfor the CR =7 and CR = 5 cases, respectively. These locations of saturation also correspond to the lo-cations of onset of growth of perturbations associated with the subharmonic (St/2). The subharmonic corresponds to the passage frequency of structures formed from the pairing ofprimary vortices. Therefore, for the confined cases, the location of pairing of the initially shed vortices is shifted further downstream. The primary structures for the unconfined case are seen to be convected at 57% of the jet centreline velocity, while for the confinedcases this increases to an average convective velocity of 63% of the jet centreline velocity.The characteristic wavelengths of the primary structures for the unconfined case was foundto be 0.8h while for the two confined cases this increases to 1.1h. Proper Orthogonal Decomposition (POD) analysis showed that for the unconfined case, within the first 5 slot jet heights, the most energetic mode pair corresponds to coherent structures which have undergone two complete pairings, while for the confined cases, the most energetic mode pair corresponds to primary vortices