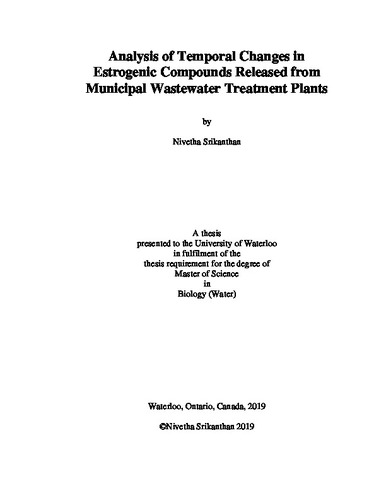 Wastewater treatment plants (WWTPs) are traditionally designed to target the removal of contaminants such as total suspended solids, phosphorous, biological oxygen demand, and ammonia. Recent changes to the Federal Wastewater Systems Effluent Regulations (WSER) in Canada require all WWTPs to be operating with secondary treatment or equivalent by 2021. Upgrades being implemented at WWTPs across the country will improve the quality of final effluent discharged into the receiving waters. However, over the past several years, contaminants of emerging concern such as pharmaceuticals, personal care products, and endocrine disrupting compounds have become widely prevalent in wastewater. These compounds are not monitored or targets for removal in Canada causing them to be routinely discharged into surface waters. The Grand River watershed is the largest watershed in southern Ontario and receives effluent discharge from 30 WWTPs. Several studies have been conducted in the Grand River to assess the impacts of effluent discharge on fish found in the river. The two largest WWTPs are the Kitchener and Waterloo WWTPs, both of which having recently undergone upgrades to improve nitrification processes and improve the overall effluent quality. Studies linked effluent from the plant’s pre-upgrade, to several adverse impacts on fish, such as severe cases of intersex and altered hormone production. Upgrades at the Kitchener WWTP were shown to reduce these impacts on fish. Effluent from both Waterloo and Kitchener have been collected and analyzed for pharmaceuticals and estrogens since before the upgrades providing the unique opportunity to evaluate the change in effluent quality and composition over time. In addition to the Kitchener and Waterloo WWTPs, nine secondary WWTPs across southern Ontario were studied to compare the composition of influent and effluent as well as evaluate the apparent removal of various pharmaceuticals and estrogens. Despite all the plants being classified as having secondary level treatment there was a considerable amount of variability in their ability to treat the incoming influent. Pharmaceuticals of interest were ibuprofen, naproxen, carbamazepine, and venlafaxine because of their different behaviour during treatment. Ibuprofen and naproxen were significantly reduced at all plants, with an increased reduction at plants achieving better nitrification. Carbamazepine and venlafaxine are recalcitrant and remained untreated. Of the estrogens measured, estriol was significantly reduced across all plants while 17α-ethinylestradiol had no difference post treatment. Estrone and 17β-estradiol were both reduced to varying degrees and were more influenced by external factors such as treatment type and biotransformation. Although there was compound specific variability, the total estrogenicity was significantly reduced post treatment at all plants except those with poor nitrification. Through the analysis of the pharmaceuticals and estrogens as well as nutrient data, nitrification was related to the apparent removal of these non-target compounds (although a direct relationship cannot be established). This correlates with the findings at the Kitchener and Waterloo WWTPs. With the introduction of nitrification at both plants there was a decrease in ammonia concentrations, improved treatment of ibuprofen, naproxen, estrone, and estradiol. There was also a decrease in the total estrogenicity of the effluent discharged from the plants. While venlafaxine, carbamazepine and ethinylestradiol concentrations remained unchanged post upgrades. Understanding the composition and concentration of contaminants in influent and effluent can provide insight into treatment processes influencing the removal and biotransformation of these compounds. This information is important when deciding on the regulation of these contaminants in effluent discharge. Chemical analysis of these compounds is also critical in developing relationships between contaminant exposure to impacts found in the Grand River. This data can aid in validating predictive models linking contaminants to specific biological endpoints.