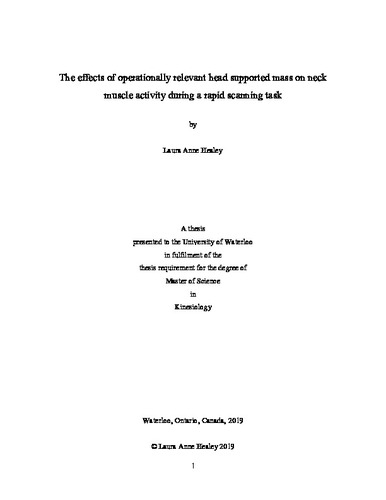 The addition of head supported mass, specifically night vision goggles (NVGs), is widely accepted as a key contributor to neck trouble among armed forces rotary wing pilots (Harrison et al., 2009). In fact, nearly 80% of rotary wing pilots in Canada report neck pain (Chafe & Farrell, 2016). However, speculation remains about the pathway by which added head supported mass may link to underlying injury pathways. The objective of this study was to probe how mass, moment of inertia, and range of motion changes associated with NVG use interdependently affect neck muscle activity. Specific research questions probed how range of motion, mass, and moment of inertia would affect co-contraction, integrated EMG, mean EMG, and peak EMG. The overarching aim of this work was to inform design specifications for an optimized helmet, that specifically considers the helmets use as a head supported mass mounting platform. Thirty participants performed a rapid, reciprocal scanning task, akin to a scanning task performed by pilots. Participants donned four different operationally relevant head supported mass conditions: (1) helmet only (hOnly), (2) helmet, NVGs and a battery pack (hNVG), (3) helmet, NVGs, battery pack, and traditional lead counterweight (hCW), (4) helmet, NVGs, battery pack, and a lead counterweight fitted inside the posterior of the helmet (hCWL). A laser pointer was attached to the NVGs directly in line with participant’s field of view allowing them to acquire solar panel targets set up in yaw (left and right) and pitch (up and down) trajectories in both near (35o arc) and far (70o arc) amplitudes. They were asked to acquire as many targets as possible in twenty seconds in both the yaw and pitch trajectories, in each of the helmet and amplitude conditions. Electromyography (EMG) was collected bilaterally on the sternocleidomastoid, upper neck extensors and upper trapezius. However, after processing only the sternocleidomastoid and upper neck extensors were analyzed. Kinematics were collected to determine the head-trunk velocity, and solar panel data were recorded to determine performance measures such as time to acquire target, and number of targets acquired. Results showed that HSM condition had a small, but significant effect on co-contraction in the yaw trajectory, where counterweighted conditions (hCW and hCWL) required significantly higher co-contraction than non-counterweighted conditions (hOnly and hNVG). Further, target amplitude had a main effect on integrated EMG and mean EMG, as well as peak EMG and co-contraction. Interestingly, target amplitude also had a significant main effect on mean velocity, where mean velocity was significantly higher at far amplitudes. Increased angular velocity may explain differences in EMG caused by target amplitude. Finally, helmet moment of inertia did not have a main effect on peak EMG. Overall, the results from this study suggest that increased range of motion may be one of the most detrimental effects caused by NVGs. Long term it is suggested designers consider increasing the field of view of NVGs to reduce the range of motion required to perform a scanning task. Alternatively, designers can implement cockpit design changes that reduce the need to move through a wide range of motion. For current helmet designers looking to make immediate changes it is suggested that mass be decreased to limit neck muscle co-contraction requirements.