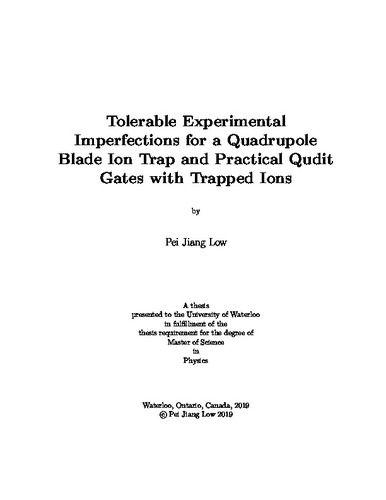 Trapped ions are one of the leading technologies in quantum information technology due to their long coherence time and low noise presence. For trapping ions, there are a plethora of ion trap architectures. Among them is a quadrupole blade trap design, which has the benefit of large optical access from all axes. It has also been shown to be able to trap up to 100 ions. This thesis gives a first detailed analysis of tolerable experimental im- perfections of a quadrupole blade trap design from calculations and numerical simulations. In this work, it is found that the critical imperfections are electrical trans-phase shift and axially-asymmetric geometric misalignment. The second part of this thesis presents qudit- based quantum gates for trapped ions. A qudit encodes multiple quantum states within an elementary unit of quantum information. The denser encoding allows access to a larger Hilbert space, which enables more efficient quantum algorithms and use of quantum re- source. However, in terms of practical realization of qudits, the additional complexities involved with manipulating multiple states within a single elementary unit may compro- mise fidelity of quantum operations. In this thesis, quantum gates generalized to qudits and the protocols to implement them on trapped barium-137 ions are presented. Numerical simulations and calculations are performed to obtain the fidelity of each qudit gate to as- sess the practicality of realizing trapped ion qudit gates. From this work, it is found that single qudit gates can easily achieve better than 99.25% fidelity. The 3-level qudit entangling gate can achieve at least 99.10% fidelity.