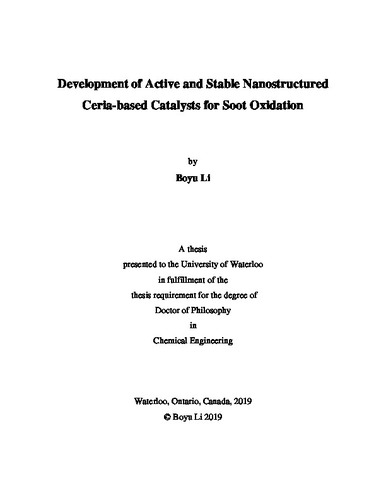 The focus of this thesis is to improve catalytic activity and stability of ceria-based catalysts for soot oxidation. The main objective was to develop an inexpensive, active and stable catalyst through iron and samarium doping. The role of iron and samarium doping towards improving catalytic activity and stability was elucidated through nano (in-situ Environmental Transmission Electron Microscope - ETEM) and bulk (Thermogravimetric Analysis - TGA) scales investigations, along with a suite of characterization techniques. Fe-doped ceria catalytic soot oxidation was investigated by observing in-situ catalytic oxidation using ETEM. Both catalyst and carbon particles can be mobile. The relative mobility of these particles appears to be correlated to the size of particles. A semi-quantitative analysis was carried out to quantify the mobility of the particles and relate it to the catalyst activity. It was found out that reaction rates were calculated and found to be positively correlated to the contact length between carbon and catalyst particles, thus indicating that the catalytic carbon oxidation occurs at the carbon/catalyst interface. Larger normalized reaction rates lead to higher movement velocity, suggesting that the mobility is caused by carbon oxidation on the catalyst’s surface. In order to improve the activity of the ceria-based catalysts for soot oxidation, different amounts of Fe doping were incorporated into CeO2. The catalysts were prepared using two different methods, co-precipitation (CP) and solution combustion synthesis (SCS), leading to different morphologies. It was confirmed by X-ray Diffraction (XRD) that iron was incorporated in the cerium oxide lattice, which formed a solid solution. For both fabrication methods, there is an optimum Fe content that gives the highest activity. For SCS catalyst, the optimum Fe content is 5%, and for CP catalyst, it is 10%. Irrespective of the fabrication method, the most important parameter that dictates the reaction activity (e.g. T50) is the Ce3+ content, which is closely related to the content of oxygen vacancies. The activity increases notably when Ce3+ content increases up to 20%. Above 20% Ce3+ content, the activity increases moderately. It is well known that pure ceria possesses poor stability performance (deactivation) and thus, inspired by the work on solid oxide fuel cell (SOFC), samarium (Sm) doped ceria was considered as a promising candidate for stable ceria-based catalysts for soot oxidation, because Sm can help form stable fluorite crystal structure. It was found that samarium doping indeed improves the stability of ceria-based catalyst for soot oxidation. In particular, at higher Sm content (10% and 20%), the reactivity (represented by T50 - temperature at 50% conversion of soot) nearly plateaus after 5 cycles. However, increasing Sm content decreases activity for soot oxidation. The 10% Sm-doped catalyst showed the best compromise between stability and activity. It was found that Ce3+ and Oα (surface oxygen species) played the most important role in controlling catalytic soot oxidation activity, because they are directly related to oxygen vacancies and oxygen storage capacity of the catalyst. Sm-doping catalysts, especially at 10% and 20% Sm, show minimum decrease in Ce3+ content and Oα percentage between fresh and spent catalysts after 5 cycles. Crystal size growth over several cycles was not found as the most important parameter for catalyst deactivation, unlike in most studies that looked at catalyst activity from accelerated thermal aging point of view. Finally, although addition of Fe on 20% Sm doped ceria catalyst did improve the activity in early cycles, but showed poor stability, which was unexpected. In summary, a series of active and stable catalysts were synthesized and analyzed in this thesis. The in-situ ETEM observation shows that catalysts and carbon particles are mobile during soot oxidation and this mobility is initialized by the oxidation happened at catalyst-carbon surface. There is an optimum Fe content that gives the highest activity for CP (10%) and SCS (5%) catalysts towards soot oxidation. The most important parameter that dictates the reaction activity is the Ce3+ content. Sm-doped ceria catalysts improved stability of ceria-based catalyst for soot oxidation and the activity of higher Sm doped catalyst (10% and 20%) nearly plateaus after 5 cycles, with minimum decrease of Ce3+ and Oα content between fresh and spent catalysts. The 10% Sm-doped catalyst shows the best compromise between stability and activity.