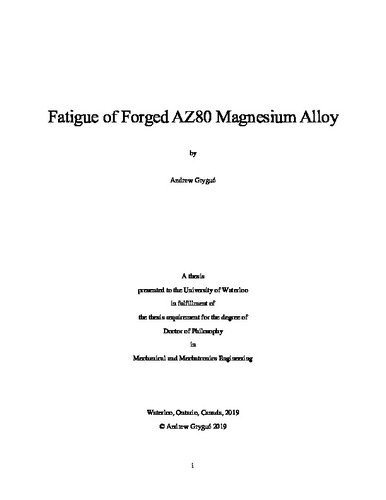 The majority of research surrounding the fatigue of Mg alloys generally exhibits a rigid dichotomy between theoretical and applied contributions. This research work addresses both of these domains of the field from a more holistic sense, yet still remains highly detail oriented. Automotive suspension components generally have complex geometries and undergo highly multiaxial loading. This is partly due to the packaging constraints imposed by the many dynamic systems within a vehicle, and the impetuous towards lightweighting to improve efficiency and reduce greenhouse gas emissions. As such, the current optimal solution for such a component typically a complex shape made from a material with high specific strength. Both forging and casting lend themselves to facilitating large scale production of such components using industrially compatible processes. Forging however produces a product with attributes which are more optimally suited for advanced vehicle lightweighting applications. Of the commercially available Mg alloys, the AZ80 alloy is a Mg alloy with good forgeability, a high aluminium content, and superior strength. However the fatigue properties of this alloy are largely unknown, especially in complex multiaxial loading paths such as which automotive suspension components undergo. This thesis acts to fill this gap in knowledge, by providing the foundation for the understanding of the complex cyclic behavior of forged AZ80 Mg, as well as predicting its fatigue life to ensure the satisfaction and safety of the end consumer. Various small scale forging methods were investigated and characterized in such a way that it one can connect them to the larger scale component in the engineering application. Two varieties of base material were selected to be forged into these small scale forgings, cast and extruded. Furthermore, an understanding was developed on the influence of material texture on the cyclic deformation mechanism and resulting fatigue life. The implications of multiaxial loading on the fatigue behaviour was also characterized as well as the effect of nonproportional loading. A variety of different models were utilized to reliably predict the fatigue life of forged AZ80 Mg in both simple uniaxial and complex non-proportional bi-axial loading paths. The culmination of all of these research objectives enabled effective utilization of forged AZ80 Mg as a lightweight material for a variety of different fatigue critical engineering applications. It was concluded that the thermomechanical history imparted to the material via forging resulted in a texture intensification and a rotation of the crystallographic cells to align with the loading direction during forging. Secondly, following forging, both the cast-forged and extruded-forged material exhibited an significant increase in fatigue life. It was also discovered that the style of closed-die forging being investigated had spatially varying properties with texture orientations which varied based on the local forging directions and intensities which were dependent on the starting texture as well as thevi thermomechanical history. Furthermore, following characterization of the materials behaviour over a variety of different loading paths, the biaxial fatigue response is somewhat dominated by the axial component and the non-proportional effect to be detrimental to the fatigue life. Finally, it was concluded that the optimal forging condition tends towards the coldest temperature and fastest strain rate which are pragmatically possible (within the context of warm forging) that produce a forging free of defects and of high quality. This optimal condition corresponded to extruded AZ80 Mg forged at a temperature of 250°C and 20 mm/sec.