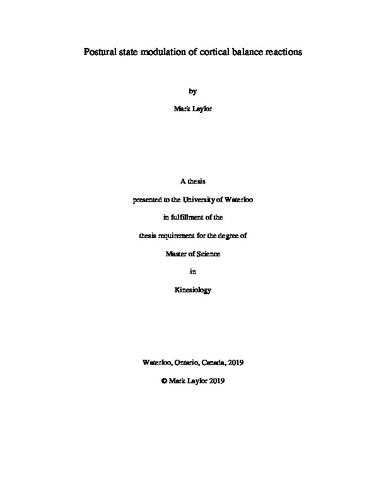 Safe and effective walking is a crucial part of daily human life, but the number of injuries and resulting financial burden from falls during walking is increasing. As a result, it continues to be important to advance understanding of dynamic balance control to improve approaches to rehabilitation and minimize fall risk. The control of stability during dynamic tasks poses a particularly complex challenge to the central nervous system (CNS) as the control of balance is performed under the changing mechanical, sensory and central states. Emerging work has a revealed the potential importance of cortical contributions to the control of stability particularly in response to moments of induced instability (perturbations). A cortically-evoked potential, the N1 response, is a discrete probe that is used to assess cortical contributions to stability and is most often used to study balance control in static contexts. Towards an understanding of dynamic balance control, it is necessary to study changes in the N1 during changes in movement isolated from other dynamic control processes. The influence of varying CNS state due to movement on cortical responses has not been evaluated. The current work assesses the response of N1 potentials during changes in pre-perturbation state evoked by different pre-perturbation leaning postures. This was used to manipulate the relative amplitude of perturbation by changing the starting position of the centre of mass (COM) with respect to the base of support. Higher threat conditions occurred when the perturbation led to movement of the COM towards the already loaded side (greater threat of instability) as compared to COM movement towards the unloaded side (low threat). It was hypothesized that pre-perturbation leaning would amplify N1 responses compared to equal-weight stance. A second hypothesis was that high threat conditions would increase the N1 compared to low threat conditions. The results supported the second hypothesis, that changes in cortical and muscle activity were related to characteristics of the threat rather than pre-perturbation changes in excitability of the N1. The effect of postural state on balance reactions was observed in response latency where leaning, regardless of perturbation direction, was associated with delayed N1 potentials compared to equal-weight stance. Scaling of cortical and muscle responses across tasks indicated that changes in posture are resolved at the onset of perturbation and reactive balance control accounts for such threats alongside the perturbation. Study designs investigating dynamic changes in posture versus the static postures used here may further explain the nature of pre-perturbation state modulation.