Bacteriophage M13 as a Template for Multi-Enzyme Assembly 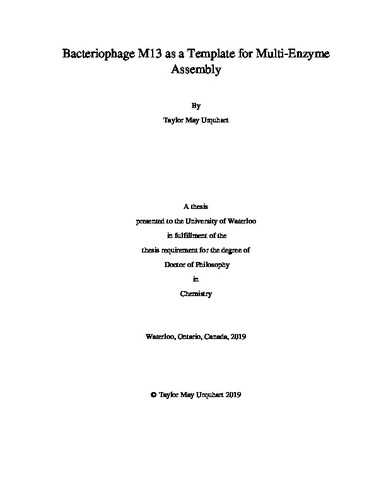 An important aspect of bionanotechnology is the utilization of biomolecules to prepare controlled and defined arrangements of multiple components with nanoscale order. Bacteriophage M13 is a filamentous phage composed of five different coat proteins: with the minor coat proteins p3, p6, p7 and p9 each having five copies at the ends of the phage. The major coat protein p8 is a small alpha-helical protein and is present in approximately 2700 copies encapsulating the M13 ssDNA genome. The goal of this thesis research was to further develop methodologies for utilizing bacteriophage M13 as a scaffold for the purpose of binding multiple enzymes with nanoscale order to p8. The cellulase, Cel8A, was selected as the model protein to explore this system, as it exists as part of a multi-enzyme complex known to form in nature: the cellulosome. Several different methodologies to load the bacteriophage with Cel8A were explored in order to determine the optimal way to prepare multi-enzyme complexes that were uniformly and densely loaded. In Chapter 2, an enzyme-mediated approach was taken to prepare an M13 construct with cohesin, a cellulosomal protein capable of binding to dockerin-containing cellulase, reacted to the p8 major coat proteins. The cohesin modules could then be used to bind the model protein, Cel8A. Under the conditions required for this enzyme-mediated reaction, cohesin was found to efficiently undergo a cyclization side reaction and an adduct to M13 could not be detected. Of the approaches tested, the most successful approaches utilized highly efficient protein-ligand interactions. Streptavidin (a tetrameric protein which binds tightly to the small molecule biotin) served as an adaptor protein which could be bound to biotinylated p8. Two main strategies were explored for interacting Cel8A with the bacteriophage scaffold. In Chapter 3, a protocol for producing monovalent SA (single biotin-binding site) with three functional groups capable of binding to His6-tagged Cel8A was devised. However, dense enzyme loading was limited by the interaction between these functional groups and the His6-tagged protein. In Chapter 4, covalently biotinylated Cel8A was utilized. The main challenge of this approach was binding all of the components (M13-biotin, SA and Cel8A) in a way that avoided aggregation. Surprisingly, it was found that under the appropriate conditions, SA on its own could efficiently coat the biotinylated bacteriophage without considerable crosslinking side interactions. It was furthermore found that the ionic strength of the solution impacted the stability of these SA-coated M13 complexes. Lastly, the constructs were tested for cellulase activity and were found to be active against both simple and complex cellulosic substrates. Over the course of this thesis, challenges which were encountered for each explored strategy are highlighted in order to improve future endeavors in preparing multi-enzyme complexes on virus-based nanoscale scaffolds.