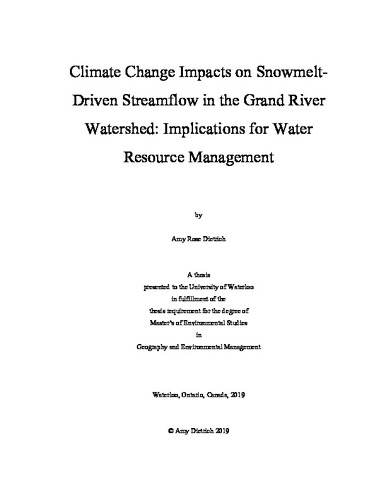 Climate change is one of the most significant global environmental drivers threatening the quality and quantity of future water resources. Global temperature increases will have significant effects on the hydrologic regime of northern regions due to changes in snowfall and snowmelt. Considerable research has been conducted in western Canada to rigorously quantify snowmelt-driven streamflow processes, however, less focus has been directed towards understanding these processes in eastern Canada and Ontario. In the southern Ontario Grand River Watershed (GRW), snowmelt contributions to streamflow (freshet) make up a significant portion of the annual water yield, and the period of snowmelt is also of key concern for flood mitigation. This thesis aims to quantify historical and projected changes to timing and streamflow during freshet in the Nith River, an unregulated tributary of the Grand River. Climate data (temperature, rainfall, snowfall, and snow proportion) from observations and future scenarios were analyzed to quantify the contributions of climate conditions surrounding the timing and volume of the freshet. The annual timing of snowmelt-driven streamflow was quantified using centre time (CT), and streamflow volumes were quantified by various percentiles of streamflow (Qn) during four periods of the water year (October-December, January-February, March-April, and May-September). Historical trends in streamflow and climate data were examined using hydrometric data (1914-2016) of a stream gauge from the Water Survey of Canada, and climate data (1950-2016) from Environment and Climate Change Canada at two stations. Projected climate data were from an ensemble of models used in the Intergovernmental Panel on Climate Change’s Fourth Assessment Report (AR4). A total of nine distinct models ran two scenarios from AR4 for the 2050s; moderate (B1) and high (A1B). These time-slice projections were then used to force the hydrologic model GAWSER to simulate future streamflow data. The results show that CT in the Nith River has advanced by 17 days, on average, from 1914 to 2016 (P=0.036), and the advance is projected to continue as a function of future emissions scenario (approximately 12 days for scenario B1, and 17 days for A1B). Historical CT was weakly negatively correlated with temperature (-0.51, P < 0.001), where colder winters were associated with a later CT. Results from a multiple regression model using climate variables to predict CT were inconclusive. Historical streamflow at the Q10 level has increased from 1914-2016 (P < 0.001), but no significant change has been observed at the Q50, and Q90 levels. Future freshet streamflow is projected to increase for both scenarios at the Q10 level (an average of 18.1% and 23.6% respectively) as well as the Q50 level (an average of 20.8% and 26.6% respectively). No change was observed in Q90 for either future scenario. The results of this thesis will inform water resource managers of climate change impacts to average hydrologic conditions in the GRW.