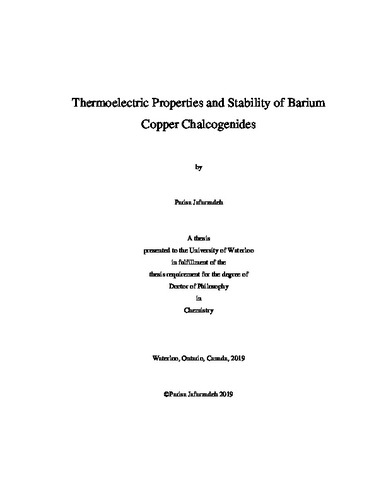 The objective of this thesis was to study the thermoelectric properties of copper chalcogenide-based materials with mixed chalcogen atom sites. Herein, the effect of different concentrations of chalcogen atoms on the physical property measurements and the performance of the thermoelectric materials with two different crystal structures were investigated. In addition, stability studies of two materials with different chalcogen atoms (S and Se) surprisingly revealed substantially different behavior. Due to the stability issues as a consequence of Cu ion conductivity at elevated temperatures, the thermoelectric application of Cu2-xS and β-Cu2-xSe is restricted at these temperatures. Taking that into consideration, quaternary copper chalcogenides with additional large atoms, Ba and Te, were synthesized. The quaternary barium copper selenide- tellurides, Ba3Cu16-xSe11-yTey, were synthesized with different x and y values by a melting and slow cooling process. Measurement of the thermoelectric properties revealed changes during repeated measurements of the same samples. Further investigations including single crystal studies after the measurements proved that this is likely a consequence of Cu ion conductivity in these materials. The reproducibility of the data was investigated by varying the maximum temperature as well as the current density. As a result, decreasing the maximum temperature and current density led to full stability. Finally, their figure-of-merit, zT, only reached a maximum value of 0.49 at 690 K. Furthermore, thermoelectric properties of the barium copper sulfide-tellurides, Ba3Cu16-xS11-yTey, were studied. Among three different studied compositions, hot-pressed Ba3Cu15.3S7.5Te3.5 has the highest power factor, 4.6 µW cm–1K–2, which is almost 50% higher than that of the best cold-pressed sample, Ba3Cu16S9Te2 with 2.4 µW cm–1K–2 at 700 K. These quaternary sulfide-tellurides are bestowed with an extraordinarily low total thermal conductivity, which is below 0.6 W m−1K−1 throughout the entire studied temperature range. In contrast to the selenides, the sulfides are stable under the applied measurement conditions. In addition, their higher stability at elevated temperatures compared to Cu2S and β-Cu2Se with high zT values renders them more feasible for thermoelectric devices. Among the three studied materials, the one with the highest Te content, Ba3Cu15.3S7.5Te3.5, exhibited the lowest thermal conductivity and the highest electrical conductivity, which resulted in zT = 0.88 at 745 K. This zT value is also almost two times larger than the zT of Ba3Cu16-xSe11-yTey. The quaternary barium copper selenide-tellurides, BaCu6-xSe1-yTe6+y have been reported earlier to be p-type semiconductors, when x = 0.1 and y = 0. Here, we studied the properties after varying the Cu and the Se/Te concentrations. At first, materials with the same nominal Cu concentration, 5.9 Cu per formula unit, and different Se/Te ratios were prepared. The different thermoelectric properties indicated that the Se/Te ratio strongly affected the Cu deficiency, which is directly responsible for the charge carrier concentration. Single crystal structure data revealed the Cu amount to be less than 5.8 per formula unit when y = 0.4; therefore, a sample of nominal composition “BaCu5.74Se0.46Te6.54” was also studied. This sample exhibited an electrical conductivity of 685 Ω−1cm−1 at room temperature, which is almost three times larger than in case of “BaCu5.9SeTe6”, in accord with the lower Cu amount causing a larger hole concentration. The larger mass fluctuation on the Se/Te site resulted in a lower lattice thermal conductivity, but the decreased Seebeck coefficient mitigated a performance increase in form of a higher figure-of-merit. In contrast to the binary Cu chalcogenides, Cu2-xS and β-Cu2-xSe, the data are stable under the measurement conditions.