Characterization of Self-Assembling Quinoline- Based Foldamers by Fluorescence Anisotropy 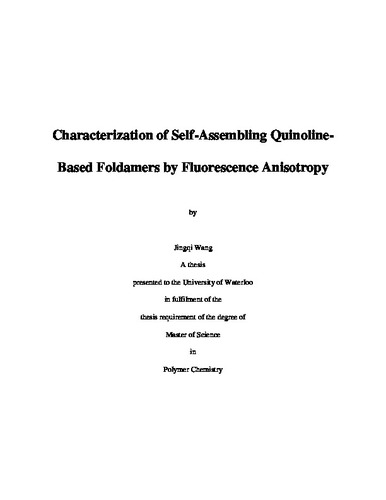 Foldamers represent a family of synthetic macromolecules which, like their biological counterparts, are able to adopt a well-defined conformation in solution. Oligoquinoline-carboxamides (Qn) are a group of foldamers that adopt a helical conformation in solution. A series of Qn foldamers were prepared by chromatography-free large-scale synthesis and segment-doubling strategy. The C-terminal ester group of the Qn foldamers could be hydrolyzed to yield acid-functionalized foldamers (QnA) which could self-assemble into larger ((QnA)2-Na) complexes by metal coordination with a sodium cation. Moreover, the addition of a bis-acid functionalized tetramer (AQ2PQ2A) to a solution of (QnA)2-Na complexes resulted in insertion oligomeric products. To characterize these complexes in solution, both Qn and QnA were end-labeled with an oligo(phenylene vinylene) dye (OPV) at their N-terminus via a rigid amide bond to yield the OPV-Qn and OPV-QnA fluorescent equivalents. OPV was used to conduct time-resolved fluorescence anisotropy (TRFA) measurements on the OPV-Qn and OPV-QnA foldamers, the (OPV-QnA)2-Na complexes, and the OPV-Qn-Na-(AQ2PQ2A)n oligomers. Analysis of the TRFA of the OPV-Qn foldamers yielded the rotational time () of the fluorescent species, which was found to reflect the hydrodynamic volume (Vh) of the foldamers. The straight line obtained by plotting as a function of the number of (quinoline) units (NUs) demonstrated that the foldamers behaved in solution as rigid cylinders for all lengths examined. The linearity of the -vs-NU plot was employed as a calibration curve against which the rotational time of the QnA-complexes could be compared. Within experimental error, the rotational time of a Qn+m complex was found to equal the sum of the rotational times obtained for Qn and Qm. This result suggests that the complexation of two acid-functionalized oligoquinoline foldamers in solution generated a fully stacked foldamer with a NU equal to the sum of the NUs of its constituting elements. Hetero-complexes between OPV-Q8A and Q16A were also produced by adding a 10-fold excess of Q16A to an OPV-Q8A solution. Complexation was demonstrated by the  value of the mixture, that equaled that of an OPV-Q24 foldamer. Dilution experiments on a solution of OPV-Q8A-Na-Q16A complexes led to the dissociation of the complexes into their OPV-Q8A and Q16A constituting elements, as evidenced by the progressive decrease in  from the value obtained for OPV-Q24 to that of OPV-Q8 upon decreasing foldamer concentration. Similarly, the addition of increasing amounts of AQ2PQ2A to a solution of OPV-Q8A in chloroform resulted in an increase in  demonstrating the formation of complexes between OPV-Q8A and AQ2PQ2A until reached a plateau for large OPV-Q8A/AQ2PQ2A molar ratios. In the plateau region, the rotational time of the oligomeric complexes generated from OPV-Q8A and AQ2PQ2A stabilized by isobutyl or hexyl side chains was equal to that of an OPV-Q¬n foldamer with n equal to 24 or 30, respectively. The apparent absence of further polymerization, evidenced by the constant value reached for high OPV-Q8A/AQ2PQ2A molar ratios, was attributed to aggregation of longer complexes and their precipitation. This study represents the first example in the scientific literature where TRFA was applied to characterize the NU of helical self-assembling foldamers in solution.