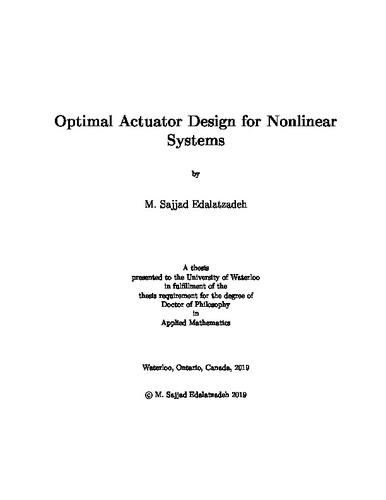 For systems modeled by partial differential equations (PDE's), the location and shape of the actuators can be regarded as a design variable and included as part of the controller synthesis procedure. Optimal actuator location is a special case of optimal design. Appropriate actuator location and design can improve performance and significantly reduce the cost of the control in a distributed parameter system. For linear partial differential equations, the existence of an optimal actuator design for a number of cost functions has been established. However, many dynamics are affected by nonlinearities and linearization of the PDE can neglect some important aspects of the model. The existing literature uses the finite-dimensional approximation of nonlinear PDE's to address the optimal actuator design problem. There are new theoretical results on the optimal actuator design of nonlinear PDE's in Banach spaces. This thesis describes new results on optimal actuator design for abstract nonlinear systems on reflexive Banach spaces. Two classes of PDE's have been studied. In the first class, semi-linear systems, a weak continuity assumption on nonlinearities is imposed to establish optimality results. Two examples are provided for this class including nonlinear railway track model and nonlinear wave equation in two space dimensions. The second class is nonlinear parabolic PDE's. For this class, the weak continuity assumption is relaxed at the cost of imposing assumptions on the linear part of the system. The examples provided for this class are Kuramoto-Sivashinsky equation and nonlinear diffusion in two space dimensions. Furthermore, a thorough study of optimal actuator location for nonlinear railway track model was conducted. The study begins with investigating the well-posedness and stability of solutions to this model. It is shown that under certain conditions on inputs, solutions to the railway track model are stable. Further on, using optimization algorithms and numerical schemes, an optimal input and actuator location are computed. Several simulations are run for various physical parameters. The simulations show that the optimal actuator location is not at the center of the track, contrary to a common belief. They also show that an optimally-located actuator significantly improves the performance of the control system.