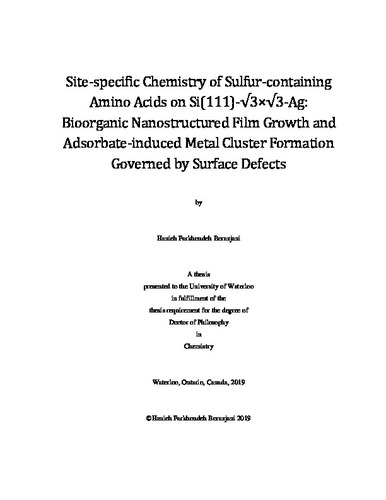 The interfacial interactions and film growth mechanisms of sulfur-containing amino acids on Si(111)-√3×√3-Ag are investigated by using x-ray photoelectron spectroscopy (XPS) and scanning tunneling microscopy (STM) at room temperature and at elevated temperature under ultrahigh vacuum condition. The complementary density functional theory (DFT) calculations with dispersion correction are used to provide precise modeling of the equilibrium adsorption configurations of biomolecules. Cysteine is found to chemisorb initially at surface defects where its island growth fronts further propagate onto terrace regions exhibiting coral-reef-like nanostructures. The lower-step edges and the antiphase boundaries are found to be the preferred adsorption sites followed by upper-step edges and terrace sites. Chemisorption of interfacial cysteine monolayer occurs through S–H cleavage and S–Ag linkage. The zwitterionic hydrogen bonding governs the intermolecular interactions in the interfacial layer, which further grows to zwitterionic multilayer. Our DFT calculations support the experimental results for chemisorption of single molecules to multimers through S–Ag covalent bonding and intermolecular zwitterionic hydrogen bonding. In addition, Ag bridge sites are found to be the most favourable adsorption sites on the surface terraces. At elevated temperatures, cysteine adspecies are found to transform the highly ordered single-atom-thick Si(111)-√3×√3-Ag overlayer into Ag agglomerates of nanometer sizes. This phenomenon offers an interesting approach to converting monoatomic silver silicide layers to silver nanoclusters and quantum dots for chemical sensing and catalysis applications. Methionine, on the other hand, does not chemisorb on Si(111)-√3×√3-Ag due to the termination of its sulfur atom by a methyl group in its methylthio methylene side chain. A minority of methionine adspecies are found to chemisorb through a dehydrogenated amino group most likely at defect sites, step edges and antiphase boundaries. Self-assembled one-dimensional molecular wires are observed at room temperature and at lower temperatures in our variable-temperature STM study, while the chemical state of these molecular wires is found to be zwitterionic by XPS. Our large-scale DFT calculations further support the zwitterionic dimer row structures of the molecular wires. To demonstrate the molecular size effect, the adsorption mechanism of glycine on Si(111)-√3×√3-Ag is also studied. All three amino acids appear to induce metallic Ag 3d features at elevated temperature, indicating the formation of metallic agglomerates. The Si(111)-√3×√3-Ag surface offers a unique platform for developing not only self-assembled molecular nanostructures but also metal nanoclusters and agglomerates for potential applications in catalysis. The Si(111)-√3×√3-Ag surface contains a number of defects, notably step edges and antiphase boundaries, that could significantly affect the adsorption and other surface properties. Detailed understanding of the relations between their structural configurations and these surface properties is of fundamental interest to further unraveling the many unique processes found for this intricate surface. Using first-principle quantum mechanical calculations based on DFT, the equilibrium geometries of the step edge and antiphase boundary are calculated and found to exhibit a one-dimensional chain of Ag trimers on both types of defect sites. Unlike the monolayer coverage in the terrace regions, the Ag:Si stoichiometric ratio is found to be 4:3 at the step edge. This ratio is calculated to be 1:1 for the antiphase boundary (and for the terrace). The total densities of states calculated for the step edge, antiphase boundary, and terrace models exhibit surface states near the Fermi level. The mid-gap state found for the step edge appears to have a more intense density of state and to locate closer to the Fermi level. The corresponding calculation of partial densities of states reveals different contributions of Ag and Si atoms at defect sites. Mid-gap states are known to improve the optical properties of materials such as photon absorption and transfer. As the Si(111)-√3×√3-Ag surface defects promote the mid-gap states and considering their adsorption to be the most favourable, they are expected to play a crucial role in designing applications in (photo) catalysis and chemical sensing.