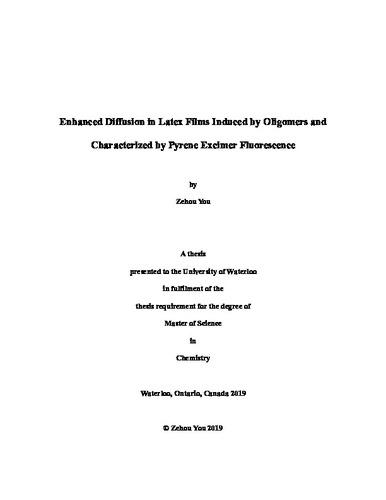 Pyrene excimer fluorescence (PEF) was used to investigate the effects that the presence of low molecular weight oligo(n-butyl methacrylate) (OBMA) have on the diffusion of high molecular weight poly(n-butyl methacrylate) (PBMA) in latex films. In this project, a high molecular weight PBMA latex labeled with 1.9 mol% pyrene (Py-PBMA, Mw = 410 kg/mol, PDI = 2.0) was mixed with nine non-fluorescent latex particles which needed to be prepared. Among these nine particles, two unlabeled latexes (Mw = 360 kg/mol, PDI = 1.8 and Mw = 420 kg/mol, PDI = 1.9) were prepared without oligomers. Their molecular weight distribution (MWD) was slightly different from that of Py-PBMA. Four latex dispersions that incorporated four different weight fractions of an OBMA with an Mn of 3.0 kg/mol were prepared from a PBMA seed latex, whose MWD (Mw = 350 kg/mol, PDI = 1.9) was close to one of the unlabeled latex particles prepared without OBMA. Three more latex dispersions with three weight fractions of OBMAs with an Mn of 5.0 kg/mol were prepared from a PBMA seed latex, whose MWD (Mw = 460 kg/mol, PDI = 2.4) was similar to the other unlabeled latex polymerized without OBMA. Several blends of latex particles constituted of 5 wt% of Py-PBMA and 95 wt% of the non-fluorescent PBMA latex with or without oligomers were prepared and latex films were cast from these mixtures. The films were annealed at different temperatures and the fluorescence spectra of the films were acquired as a function of annealing time. They were analyzed to retrieve the fraction of mixing (fm), representing the molar fraction of Py-PBMA chains having diffused out of the Py-PBMA latex. In turn, the diffusion coefficients reflecting the diffusion of the polymer chains during film annealing were calculated from the fm values at each temperature and for different annealing times. Diffusion of the Py-PBMA chains was much enhanced upon mixing the Py-PBMA latex with the PBMA latex that contained a larger weight fraction of a same OBMA or a shorter OBMA at a same weight fraction. Master curves of the diffusion coefficient as a function of fm could be generated by determining the shift factors (aT). A plot of Ln(aT)-vs-1/T yielded the activation energy for the diffusion of the Py-PBMA chains, which was found to equal 163 ± 9 kJ/mol, regardless of the OBMA content or chain length. The efficiency (β) of OBMA as a plasticizer was determined as a function of oligomer length using the Fujita-Doolittle model. In addition, the temperature dependence of the efficiency was studied. The results showed that the plasticizer efficiency of the 3.0 kg/mol oligomer was larger than that of the 5.0 kg/mol at all temperatures studied, but that the difference in plasticizer efficiency between the two oligomers decreased for decreasing temperatures. The higher plasticizer efficiency of the 3.0 kg/mol oligomer was confirmed from a plot of Tg as a function of oligomer weight fraction, showing that Tg decreased more markedly with the 3.0 rather than the 5.0 kg/mol oligomer. In summary, this project further demonstrated the validity and robustness of the procedure based on pyrene excimer formation (PEF) to probe polymer chain diffusion in latex films.