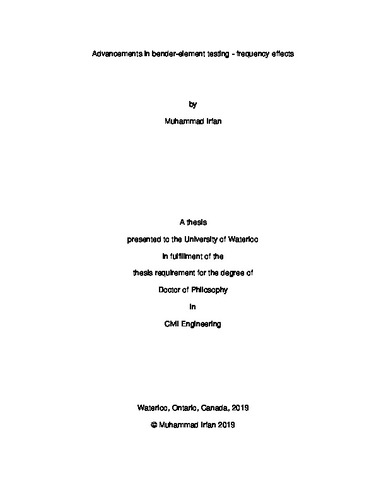 Modern building and bridge codes require seismic design of foundations and structures; for which, the evaluation of the soil’s response to dynamic loads is an important requirement in seismic design. The dynamic soil response is governed by its dynamic properties such as shear modulus (wave velocity) and damping ratio. These soil dynamic properties are typically measured in laboratory mostly using a bender element system (BE) or a resonant column (RC) device. However, the operating frequency range of BEs (e.g. 1 to 15 kHz) and the RC (e.g. 20 to 220 Hz) are not representative of typical earthquake loads (e.g. 0.1 to 10 Hz). In addition, there are significant limitations in BE and RC testing which reduce their reliability. Thus, current seismic designs could be either conservative or unsafe. A major limitation in BE testing is that there is no standard procedure; mostly because the soil-BE interaction is not well understood; and the characterization of BE inside a soil specimen was not possible. On the other hand in RC testing, the soil dynamic properties cannot be evaluated simultaneously as function of frequency and strain. In a typical narrow-band resonant column test (e.g. sine sweep, random noise), the induced shear strains are different at each frequency component. Therefore, the main objectives of this study are to understand better the soil-BE interaction; which will provide the basis for the development of reliable guidelines for BE testing; and to verify the BE test results using the standard RC device. The main objectives are achieved by testing the BE using a state-of-the-art laser vibrometer and a newly developed transparent soil to measure the actual response of the bender element transmitter (Tx) and receiver (Rx) inside different media such as air, liquids, and sand under different confinements. Then, the dynamic characteristics of the Tx are measured using advanced modal analysis techniques originally developed for structural applications (e.g. Blind Source Separation). The modal analysis is used to investigate if the different BE vibration modes correspond to a cantilever beam, as currently assumed or a cantilever plate. The Rx is also studied to assess the effects of compressional waves, the total damping of the BE system inside the medium on the actual evaluation of the shear wave velocity of the soil. In addition, the dependence of the output voltage from the Rx and the applied strain is investigated at different confining pressures. The thesis concludes with the dynamic characterization of a sensitive clay (Leda clay) that is present in large areas of Eastern Canada (Leda or Champlain sea clay) BE and RC tests are performed on unique undisturbed samples. All results presented in this study represent to the averages of multiple tests (more than 10 for RC and more than 500 for BEs). In all cases, the maximum coefficient of variance was 3 % which demonstrates the repeatability of the measurements. Contrary to a common assumption in BE testing, measurements on the transparent soil show that the Tx response inside the specimen is significantly different from the actual input voltage. In addition, BE measurements in soil and oil show that the time delay between input excitation and Tx response is not constant but it decreases with the increase in frequency. Results from the modal analysis of the Tx show a cantilever beam deformation (2D) only for the first mode of the Tx response in air and liquids; however, the response inside the soil specimen (no confinement) shows a cantilever plate behavior (3D). The excitation frequency in BE test should not be constant as commonly done; but it should be increased at each confinement level to match the increase in natural frequency and improve the signal-to-noise ratio. The overall damping ratio of the Tx increases up to 30% with confinement because of the soil-BE interaction, causing additional challenges in the evaluation of shear wave velocity and damping ratio from BE tests. The measured BE-system response shows a significant p-waves interference that affects the evaluation of the shear wave velocity. The p-wave interference must be carefully evaluated for the correct interpretation of the results. The p-wave interference is clearly observed when the Rx response is measured inside different liquids. This interference increases with the increase in the excitation frequencies. The Rx response in the transparent soil shows that participation of high frequencies and the interference of p-waves increases with increase in confinement. The p-wave arrivals mask the shear wave arrivals; which can lead to the overestimation of shear waves by more than 25 %. The results from the RC and BE tests on fused quartz and Leda clay specimens confirm the conclusion that high input frequencies enhance the generation of p-waves. The theoretical relationship between the maximum BE displacement and maximum input voltage for the Tx or the maximum output voltage for the Rx is verified for the first time for liquids and sands at no confining pressure. The peak displacements at the tip of the BE increased linearly with the input voltage because the maximum displacement in a piezo-electric transducer is proportional to the applied voltage. RC and BE tests performed on four Leda clay samples showed the effects of shear strain, confinement, and excitation frequency on shear modulus and damping ratio of the Leda clay. The effect of frequency is evaluated using a recently proposed methodology called the ‘carrier frequency’ (CF) method. The stiffest sample displayed the highest degradation with the increase in shear strain. There is a 15 % difference observed between the shear wave velocity estimates from RC and BE tests. The RC tests at frequencies below 100 Hz showed no effect of loading frequency on shear modulus and damping ratio; however, BE tests at frequencies centred at 12kHz did show a 15% change in wave velocity. This change could be attributed to the loading frequency or to the complex interaction of between p-waves and s-wave in BE testing. Loading frequency in BE tests does have a significant effect in the results, up to 40% error in the estimation of s-wave velocity, as the interaction between p-waves and s-waves increases with frequency.