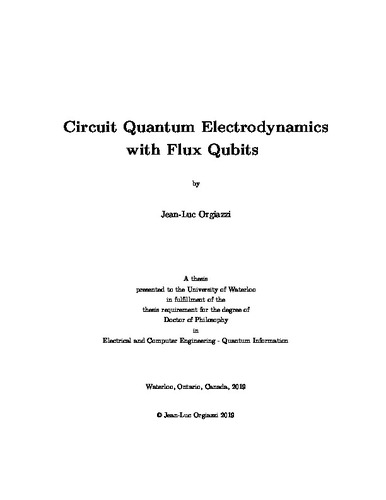 This thesis presents circuit quantum electrodynamic (cQED) experiments done with artificial atoms coupled to a high quality factor superconducting microwave resonator. This work discusses the theoretical framework, design, fabrication, implementation and characterization of a multi-qubit system using superconducting persistent current qubits, often referred as flux qubits. We developed a new type of cryogenic aid for fast turnaround microwave experiments. The minimum turnaround time to perform microwave experiments in dilution refrigerators is typically a few days, as required by cooling down and warming up the entire refrigerator. The cryogenic microwave payload and wiring needed for each qubit and resonator add a significant heat load to the system which typically only has a few µW s of cooling power at millikelvin temperatures. We present a new experimental approach we developed in which a suitable sample holder is attached to a cold-insertable probe and brought in contact with transmission lines permanently mounted inside the cryostat. The total turnaround time is reduced to 8 hours if the target temperature is 80 mK. This new measurement method increased our ability to successfully identify good devices with fast design-characterization iterations, while allowing months-long measurements at 30 mK. Our device architecture uses several qubits, each of which is controlled via on-chip fast flux bias lines. Readout of the qubit’s quantum state is performed by homodyne detection of the resonator field at large driving power. We observe long coherence times at the optimal bias point of the flux qubits and present decoherence measurements around this optimal point, where the flux qubits couple mostly to magnetic flux noise. Dynamical decoupling techniques employing fast microwave pulses are used to protect the qubit’s coherence and allow calculating the magnetic flux noise power spectral density of the qubit’s environment. Photon-mediated interaction between distant qubits in the resonator allows the implementation of a two-qubit controlled-NOT gate using the selective darkening technique. This multi-qubit superconducting design is an interesting platform to study the decoherence properties of flux qubits, the properties of strong interaction of electromagnetic radiation with macroscopic quantum systems. These results demonstrate the potential of cQED as a platform for fundamental investigations of decoherence and quantum dynamics of flux qubits.