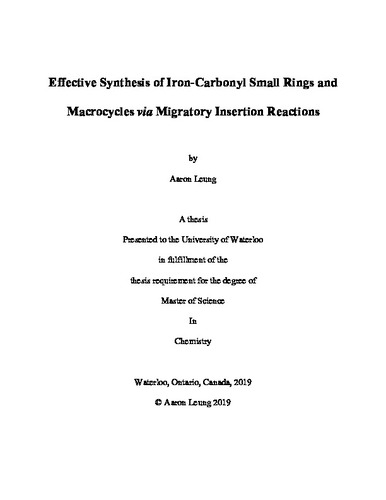 Migratory insertion reactions (MIRs) of PFpR [PFp = (PPh2(CH2)3Cp)Fe(CO)2, R = (CH2)5CH3 or (CH2)4CH=CH2], which involve migratory insertion polymerization (MIP) and intramolecular migratory insertion cyclization (MIC), produce P(PFpR) macrocycles and cyclized PFpR rings, respectively. MIC occurred at the early stage of MIR, while MIP exclusively underwent ring-closing with no linear analogues generated. The effect of solvent, temperature and the concentration of PFpR on MIR was investigated, based on which the competition of MIP and MIC was regulated for the effective synthesis of P(PFpR) or cyclized PFpR rings. Cyclized PFpR was synthesized as the only product in THF with a low concentration of PFpR (1 wt. %), while ring-closing MIP was predominated under the condition at 60 °C with high monomer concentration of PFpR in THF (> 70 wt. %) resulting in P(PFpR) macrocycles with Mn up to 17,500 g/mol. This effective synthesis of ring molecules is attributed to the piano-stool coordination geometry and the low rotation barrier of Cp-Fe bond, and will facilitate further exploration of ring molecules as functional materials and supramolecular building blocks.