Contextuality and Ontological Models: A Tale of Desire and Disappointment 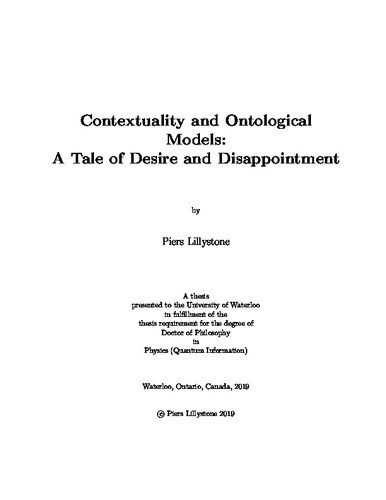 Since being defined by Kochen and Specker, and separately by Bell, contextuality has been proposed as one of the key phenomena that distinguishing quantum theory from classical theories. However, with the rise of quantum information contextuality's position as the leading definition of the quantum/classical boundary has been called into question. This is due to the fact that a contextual explanation is required by subtheories that offer no exponential quantum computational advantage over classical computation. In this thesis, submitted in requirement for a PhD in physics with quantum information, we shall explore this unwanted contextuality, and show that generalized contextuality is more prevalent than was previously thought. First we will show that the single-qubit stabilizer subtheory, which was previously thought of as a non-contextual subtheory, requires a generalized contextual ontological model, when transformations are included in the operational description. In addition to this we show that the even smaller single-rebit stabilizer subtheory, a strict subtheory of the single-qubit stabilizer subtheory, must also admit a generalized contextual ontological model, again when transformations are included in the operational description. We then show that both these subtheories require negatively represented quasi-probability representations, re-establishing the link between contextuality and negativity for transformations. We also investigate the representation of transformations in generic quasi-probability representations, showing that under a reasonable assumption almost-all unitaries must be negatively represented by a finite quasi-probability representation. Second we will investigate the efficiently simulable n-qubit stabilizer subtheory, which exhibits all forms of contextuality and thus represents the main obstacle to identifying contextuality as a resource for quantum computation. To this end we present an attempt at constructing a model based on a frame-switching Wigner function. This leads us to constructing a contextual ψ-epistemic ontological model of the n-qubit stabilizer formalism. We shall see that this model is outcome deterministic, which is one of the core assumptions in the definition of traditional non-contextuality. This model then will lead us to a result that proves that any ontological model of the n-qubit stabilizer formalism requires at least n-1 generators to be encoded in the ontology of the model. As n-1 generators represents almost full knowledge about the stabilizer state, we therefore posit that ψ-onicity, a more controversial notion of non-classicality, is actually the resource for quantum computation.