Diving in: The Architecture of Urban Lake Swimming 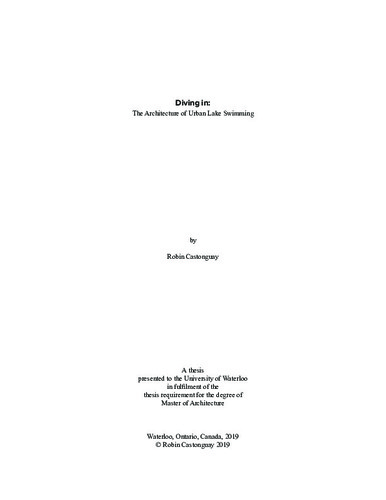 In the nineteenth century and beginning of the twentieth century, the Lake Ontario waterfront along the Greater Toronto Area was packed with swimmers enjoying its waters. Today, on a hot summer’s day, one could find the beaches, splash pads, and pools packed, but few swimmers in the lake. Fear of swimming in urban lakes, fueled by a history of pollution and social constructs related to health, have propelled us into filtered and chlorinated alternatives. By moving away from using Lake Ontario as a place for swimming, we’ve turned a blind eye to our negative impact on the water. Lake Ontario is safe for swimming most of the time, and yet, there are still many people who would not dare venture in, for fear of health risks. This fear has grown in part from centuries of pollution. The nineteenth century saw deforestation, farming and commercial fishing grow, as well as an urban expansion caused by a dramatic rise in population and industry, all of which resulted in a decrease in the water quality of Lake Ontario. Competition between recreational and industrial activities along Toronto’s waterfront eventually saw swimmers being pushed to the margins of the city. In the twentieth century, the use of phosphate detergents and commercial fertilizer, sewage infrastructure that dumped sewage and rainwater along the region’s waterfront, and the introduction of invasive species led to a growing number of beach closures over the years. Swimmers were thereby forced out of the lake and into more dependable alternatives. However, since the 1970s, thanks to infrastructural upgrades and environmental policies put in place by all levels of government, the quality of Lake Ontario water has improved, but the return of urban swimmers to the lake has not, due to the inherited and antiquated physical environment and social constructs that continue to shape our relationship with it. This thesis aims to bring urban swimming back to Lake Ontario. To realize this, I propose three strategies implemented at a site along the Mississauga waterfront by using architecture to educate the public regarding water quality perception, re-engage people back into the lake, and improve lake ecosystem health.