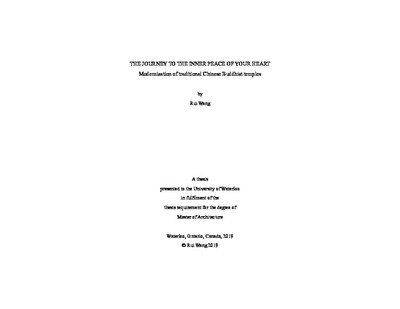 This thesis aims to explore the method of designing contemporary Chinese Buddhist temples in terms of investigating how Buddhist temples should develop without repeating traditional forms nor losing the sacred sensation. While the Chinese society has developed drastically in the past several decades, Buddhist temples in China remain the same typology as traditional courtyard buildings. Even though materials and construction techniques have changed, people build fake traditional courtyard buildings by using fake wood components covering original concrete structures. These fake traditional temples not only infringe the authenticity of materials but also fail to provide the feeling of holy as religious architecture. Criticizing fake traditional Buddhist temples, this thesis suggests that the essence of religious architecture is the spiritual journey rather than forms and appearances. As the spiritual journey consists of three parts (the entrance, the path and the place as destination), this thesis includes three parts as well, completing the process of the journey. The first part opens the conversation by introducing the context and explaining the issue. The second part profoundly explores Chinese Buddhism and investigates the contemporary religious architecture both in theory and through selected precedents. The third part offers a design of a contemporary Buddhist temple in China, which proposes a journey as the foundation for the design. The journey responds to the pilgrimage sequence of Buddhists, in the meantime, connects the history with the present in the same temple. This thesis attempts to stop architects from duplicating historical forms of Buddhist temples, meanwhile, to show them a better way of how to create spiritual experiences in religious architecture.

Rui Wang (2019). The Journey to the Inner Peace of Your Heart-Modernization of traditional Chinese Buddhist temples. UWSpace. http://hdl.handle.net/10012/15117