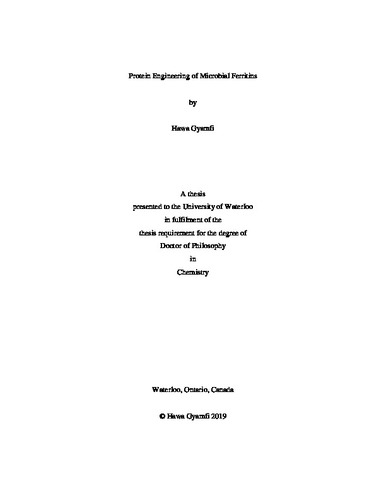 Nanotechnology has become a field of intense interest due to its applications in medicine, cosmetics, energy, and fabrics. The field has evolved to include nanodimensional self-assembling cage proteins which are multisubunit proteins surrounding a hollow cavity. Cage proteins can be engineered with precision, by either chemical, enzymatic or recombinant DNA methods, to accommodate non-native guest molecules both internally or externally. The inside cavity could be engineered to encapsulate inorganic nanoparticles or drugs, enzymes, or to serve as a size constraint reaction vessel for nanoparticle synthesis. However, exterior modification of these proteins has not been extensively explored. The most common initial studies have included the attachment of antibodies for targeting. We show that: (1) The N-termini of the subunits of Escherichia coli bacterioferritin (Bfr) can be modified by recombinant DNA methodologies to produce peptide fusions, which are termed “QTag-Bfr” tags, and which can be modified by bacterial transglutaminase to link substituted amines to the exterior surface of Bfr. These modifiable tags may be employed in the future for affinity chromatography applications, as precursors to nanoparticle superlattices and as anticancer drug/imaging agent delivery vehicles. The exact sequence of these tags was found to also control the final quaternary structure of Bfr. (2) The interior surface can be modified with affinity tags to allow for controllable encapsulation of functionalized guest molecules, and we extend previous research by elaborating on the incorporation of green fluorescent protein, gold nanoparticles, and micelles with Bfr and the “QTag-Bfr” constructs. (3) Similar strategies were extended to a recently discovered thermophilic Archaeoglobus fulgidus ferritin (AfFtn), and various engineered AfFtn were studied with respect to the encapsulation of a range of guest molecules, yet also provide a more open cavity capable of novel investigations on guest entrapment. (4) An extensive computational docking study was undertaken on the Bfr heme cofactor binding site which led to the identification of potential non-heme replacements which were tested for control of the quaternary structure of E. coli Bfr. These studies provide several versatile nanodimensional capsule protein frameworks which could be utilized in the future for the production of new biomaterials, as therapeutics in medicine and expand our knowledge on capsule protein biotemplating and protein engineering.