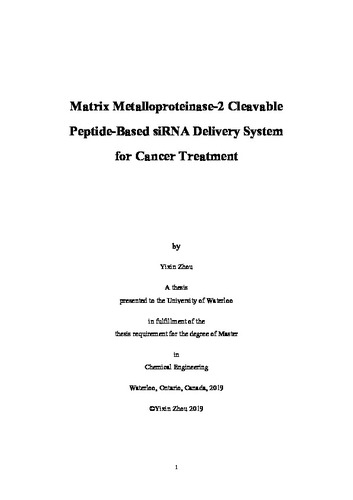 Among all kinds of gene therapy, siRNA, a class of 20 to 25 nucleotide-long double-stranded RNA molecules, is one of the promising therapeutic solutions to regulate post-transcriptional process for cancer treatment. However, naked siRNA is easily degradable in the body circulation system and cannot efficiently be consumed by cells. To overcome this problem, cell-penetrating peptides (CPPs) have received much attention due to their ability to translocate through plasma membranes along with a low toxicity. In past years, our group has developed a CPP called NP1 (Stearyl-HHHHHHHHHHHHHHHHRRRRRRRR-NH2), aiming to provide highly efficient siRNA delivery. However, although NP1 has outstanding transfection results on various cell line on in vitro tests, it could not provide promising results on serum environment since the presence of serum largely reduces the transfection efficacy and the overall positively charged surface of NP1/siRNA complex is not favored in systematic application. Matrix metalloproteinase-2, a category of gelatinase subgroup of MMPs, has been confirmed playing a critical role in tumor progression, angiogenesis, and metastasis. It has the ability to degrade the surrounding ECM to help cancer cell migrate inside the body. Thus, relatively larger amount of MMP-2 secretion can be detected at tumor site which makes them a universal stimulus for bio-responding. Herein, this thesis focus on increasing the stability of NP1 while maintaining the high transfection efficiency in the presence of serum. The complex surface will be sheltered with polyethylene glycol (PEG) to screen the surface charge and avoid serum protein binding; Furthermore, the linker between NP1 and PEG, with composed of 8 specific amino acid sequence (GPLGIAGQ), will be recognized by matrix metalloproteinase-2 to achieve sensitive cleavage of PEG. In this study, the following objective has been examined: (i) success cleavage of the designed linker and the existence of MMP2 in the cultured environment ; (ii) the physicochemical characterization of the modified peptides, and the interaction between peptides and siRNA molecules; (iii) the evaluation of the silencing efficiency, and toxicity of peptides/siRNA complexes in cultured cells in serum environment versus the results from NP1; (iv) in vitro biocompatibility study of the peptides/siRNA nanocomplexes, and (vi) the stability along with the RNase resistance ability of new modified peptide carrier comparing with NP1.