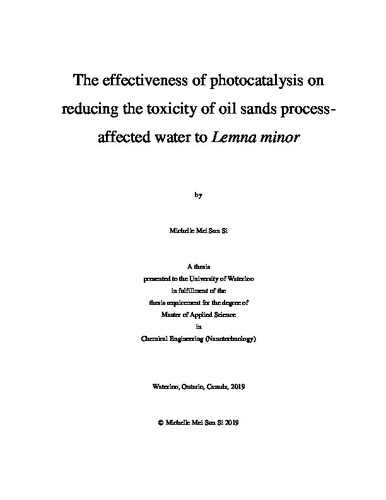 Oil sands process-affected water (OSPW) is a by-product produced by the surface-mining of oil sands in Alberta, Canada. OSPW has been found to be acutely and chronically toxic to many forms of wildlife, and due to the industry’s zero-discharge policy, it is stored on-site in tailings ponds. There is a need to establish a method to treat OSPW for environmental release as none currently exist. OSPW is a complex saline solution composed of high concentrations of clays, dissolved organic compounds, trace heavy metals, inorganic compounds, and trace amounts of solvents and bitumen. Naphthenic acids are a group of structurally diverse compounds found in the dissolved organics fraction and are among the most toxic organic pollutants present in OSPW. Photocatalysis using TiO2 is a promising method for reducing the toxicity of such compounds via organic mineralization, and it has been proposed that after a primary photocatalytic treatment step, the treated OSPW can be discharged into wetlands for bioremediation and phytoremediation to treat the remaining pollutants. This research is focused on demonstrating the effectiveness of photocatalysis in reducing naphthenic acid toxicity by exposing the treated OSPW to the freshwater macrophyte Lemna minor. Photocatalytic treatment of OSPW reduces the toxicity of dissolved organics such as naphthenic acids to L. minor, but not that of trace heavy metals. This report shows that photocatalysis is effective at degrading organic compounds present in OSPW, and it also provides a better understanding of the effects of different OSPW components on L. minor.