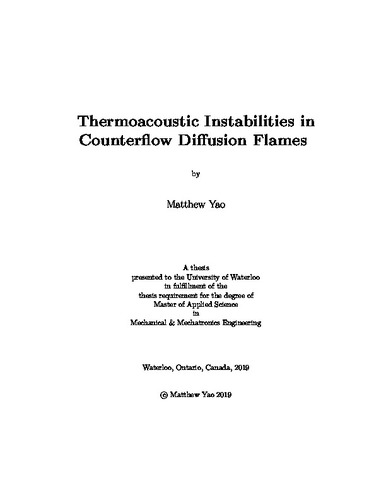 Thermoacoustic instabilities arise in combustion systems from a coupling between the unsteady heat release of the flame and the underlying acoustic field. Although thermoacoustics have been studied extensively with regards to premixed flames, where the fuel and oxidizer are fully mixed before combustion, the study of thermoacoustics in diffusion flames is much more limited. However, thermoacoustic instabilities are also of interest for the design of systems which are better characterized by diffusion or nonpremixed flames, for example, liquid rocket engines. As such, this thesis aims to investigate, using an in-house developed combustion solver, the behaviour of thermoacoustic fluctuations in a diffusion flame. The thermoacoustics are studied in the counterflow diffusion flame configuration, where the flame exists between two opposed jets containing the fuel and oxidizer respectively. An unsteady compressible reactive flow solver is integrated into an in-house code. The code is then coupled to Cantera to obtain the transport and thermodynamic properties. Finally, to study the thermoacoustics, time-dependent Navier-Stokes Characteristic Boundary Conditions are implemented in the code to account for fully reflecting, partially reflecting, and nonreflecting boundary conditions. The code is validated against the steady solution obtained from Cantera. The flame under consideration consists of \chem{H_2} as the fuel and a mixture of \chem{O_2} and \chem{N_2} as the oxidizer. Two different strain rates are studied. Under the assumption of perfectly reflecting boundary conditions, the growth of the acoustic perturbations in the high strain rate case is much more significant than the low strain rate case. Under the partially reflecting boundary conditions, the high strain rate case also exhibits some slight growth of the acoustic perturbations. An underlying standing wave behaviour can be identified and the dominants modes extracted through a spectral analysis. For further investigation, a number of forced sinusoidal pulses were introduced into the fuel stream, and the response was measured via Rayleigh's criterion. The results show that the acoustic fluctuations are amplified for a larger range of frequencies in the high strain rate case compared to the low strain rate case, which helps to explain why the acoustic growth in the high strain rate case is much more significant.