Setup of Dry Cryostat for Measurements on Superconducting Microwave Resonators 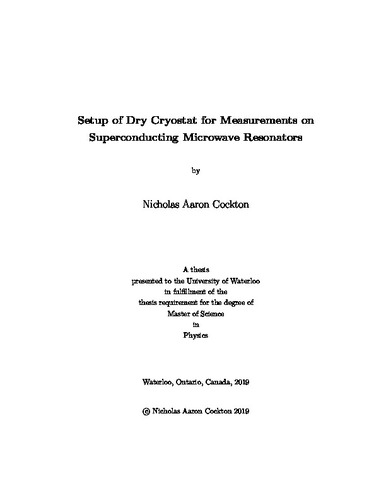 A cryogen-free cryostat was set up in order to perform measurements at ultra low temperatures. The setup involved the removal of an adiabatic demagnetization refrigerator (ADR) and replacing it with a dilution refrigerator system. The modified cryostat is able to provide continuous cooling power, enabling greater flexibility over the ADR in the type of low temperature experiments that can be performed. Condensation stages, main flow impedance and radiation baffles were designed, constructed and installed into the cryostat. Several general cryostat design considerations are also discussed. Condensation of the incoming 3He - 4He mixture utilizes only the cooling power of the two-stage pulse tube refrigerator. For a circulation rate of 120 μmols/sec, the base temperature of the cryostat is 70 mK with a cooling power of 33 μW of heat at 100 mK. With this cryostat, a measurement system is developed for studying superconducting microwave resonators. Residual losses in these devices continue to impede their performance in applications such as ultra sensitive detectors and quantum computing. A microwave circuit consisting of coaxial cables, attenuators and amplifiers was installed on the cryostat to measure losses in these devices. Data analysis and fitting procedures were written in Python programming language to extract key resonator properties. Characterizing and understanding loss mechanisms for these devices will lead to improved materials and fabrication methods. This will ultimately result in losses that approach the fundamental limit set by the Mattis-Bardeen theory.