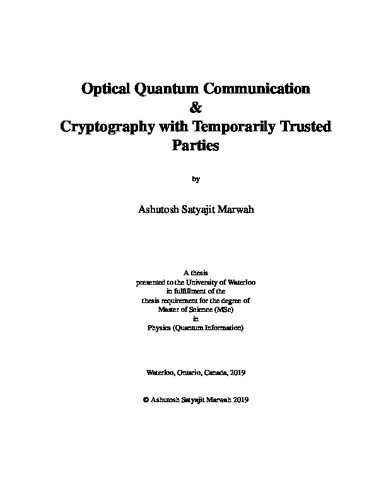 The work in this thesis can be divided into three parts. The first two parts deal with optical quantum communication protocols and the third part deals with quantum cryptography. The first part of the thesis is a step towards reformulating quantum protocols in terms of coherent states. Quantum communication protocols are typically formulated in terms of abstract qudit states and operations. This leaves the question of an experimental realization open. Direct translation of these protocols, say into single photons with some d-dimensional degree of freedom, are typically challenging to realize. Multi-mode coherent states, on the other hand, can be easily generated experimentally. Reformulation of protocols in terms of these states has been a successful strategy for implementation of quantum protocols. Quantum key distribution and the quantum fingerprinting protocol have both followed this route. In Chapter 3, we characterize the Gram matrices of multi-mode coherent states in an attempt to understand the class of communication protocols, which can be implemented using these states. We also derive the closure of the Gram matrices, which can be implemented in this way, so that we also characterize those matrices, which can be approximated arbitrarily well using multi-mode coherent states. In the second part of the thesis, Chapter 4, we describe our collaboration with an experimental group to implement the quantum fingerprinting protocol and examine the tradeoffs between the resources required to implement such protocols. It is seen that it is difficult to implement the quantum fingerprinting protocol experimentally for large input sizes. This leads us to study the tradeoff between the two resources expended during optically implemented simultaneous message passing communication protocols: the duration of the protocol and the energy required to run it. We derive general bounds on the growth of these quantities which are valid for all optical protocols. We also develop tighter bounds for the growth of these resources for protocols implementing quantum fingerprinting with coherent states. Finally in Chapter 5, we venture into quantum cryptography. We introduce a new setting for two-party cryptography with temporarily trusted third parties. In this setting, in addition to Alice and Bob, there are third parties, which Alice and Bob both trust to be honest during the course of the protocol. However, once the protocol concludes, there is no guarantee over the behaviour of these third parties. It is possible that they collaborate and act adversarially against the honest parties. We implement a variant of bit commitment in this setting, which we call erasable bit commitment. In this primitive, Alice has the choice of either opening or erasing her commitment after the commit phase. The ability to ask for an erasure allows Alice to ask the trusted nodes to erase her commitment in case the trust period is about to expire. However, this ability also makes erasable bit commitment weaker than the standard version of bit commitment. In addition to satisfying the security requirements of bit commitment, our protocol also does not reveal any information about the commitment to the third parties. Lastly, our protocol for this primitive requires a constant number of trusted third parties and can tolerate a small number of dishonest trusted nodes as well as implementation errors.