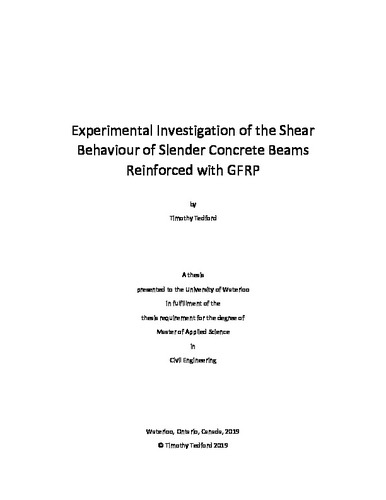 Glass fibre-reinforced polymers (GFRP) are being used as longitudinal and shear reinforcement in specialized concrete applications. GFRP products are designed as direct replacements for conventional steel reinforcement and GFRP reinforced concrete (RC) beams exhibit similar flexural behaviour to steel RC beams. The shear behaviour of RC beams reinforced with GFRP shear reinforcement is less studied and is normally modelled using semi-empirical formulations based on existing steel reinforcement guidelines. These models are calibrated based on the existing set of experimental tests on GFRP RC beams which is limited at a maximum tested shear-span-to-depth (a/d) ratio of 4.5. A parametric study on the effect of slenderness on the shear behaviour of GFRP beams was conducted by Barrage (2017) using ABAQUS, a finite element analysis software, and concluded that the existing models used by CSA and ACI may not be suitable to predict the behaviour of overly slender RC beams with GFRP shear reinforcement. The purpose of this research was to investigate the behaviour of slender GFRP RC beams and confirm the applicability of existing code models and the analysis by Barrage (2017). The experimental program being presented tested 10 slender GFRP RC beams. The beams had a/d ratios of 4.5, 6.5, 8.5 and 10.5 and included specimens with and without transverse reinforcement. These specimens failed in shear or flexure capturing the full range of slender shear behaviour. Two additional beams with a/d ratios of 4.5 and 6.5 were tested to examine stirrup spacing requirements. These specimens were tested under monotonic loading in three-point bending. The results of the experimental program showed strong correlation with existing research on shorter beams. The reduced stiffness of the GFRP longitudinal reinforcement caused a reduction in aggregate interlock and overall decreased shear strength. This effect was more pronounced with increasing slenderness. Additionally, the tests indicated that with increasing slenderness the GFRP stirrups are under-utilized and failure is concrete controlled. CSA S806 (2012) and ACI 440 (2003) provisions well predicted the failure loads of the test specimens and CSA S806 well predicted the governing mode of failure and deflections at service load levels. Existing stirrup spacing requirements in CSA S806 were found to be overly limiting for GFRP stirrups. The results indicated that proper detailing can prevent stirrup bend rupture observed in previous tests. None of the tested specimens failed due to stirrup rupture. The ABAQUS models used by Barrage were found to have reasonably good predictions of beam behaviour. The models were found to generally over-predict the stiffness of specimens and ultimate load capacity. Additionally, the models were unable to capture the failure mechanism that governs in GFRP beams showing a more ductile response that lead to over-predictions of ultimate loads. Further research investigating the detailing requirements to prevent stirrup rupture are recommended. Additionally, further research isolating the effects of GFRP shear reinforcement by testing specimens with steel longitudinal reinforcement and GFRP shear reinforcement are recommended to further examine the behaviour of GFRP stirrups. Finally, investigation into proper modelling of shear crack failure mechanisms in FEA is required to better predict beam behaviour.