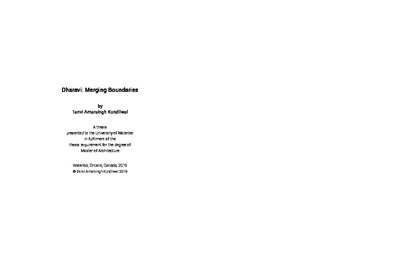 In Mumbai, Dharavi, occupying over 525 acres, houses a million people, making it one of the world’s largest informal settlements. In ever-expanding Mumbai, Dharavi, once at the city’s edge, has become its heart. With 20,000 industries specializing in leather, textile, pottery, food processing and recycling; numerous schools and hospitals; multiple religious structures, Dharavi create jobs for thousands, contributing almost 3% of Mumbai’s economy. It cannot be classified as a slum - Dharavi is rather a city within a city. While rich in culture, citizens of Dharavi live in very poor conditions. The government wants to push the dwellers aside and replace their dwellings with offices and towers. This research demonstrates that Dharavi, a place that has existed since before the British invaded India, where thousands of families have been living for generations, is worth saving. They need their lives to be upgraded, not uprooted. The first step of creating positive change in Dharavi is to influence public perception: to present Dharavi as a vibrant place that is worth saving. The objective of this thesis is to create a significant awareness among people, so that progressive development that caters to the needs of dwellers, can begin in Dharavi. Hence this thesis proposes an interpretation center for tourists, where they can learn about the positive aspects of Dharavi as their first stop to slum tourism. The tourists can see a preview of Dharavi by observing workers in action in its attached workshop. Dharavi faces at least one major drawback in every industry. The aim of the workshop is to educate the workers on better practices in their respective industries, giving them the opportunity to learn and incorporate their education in their own businesses. This project also proposes a water filtration unit to clean the now polluted river. The concept of a filtration unit along with an amenity can be used as a prototype at a certain interval along the river that would help rejuvenate Mithi River.