On the Prediction of Gas Hold-up in Ebullated Bed Reactors 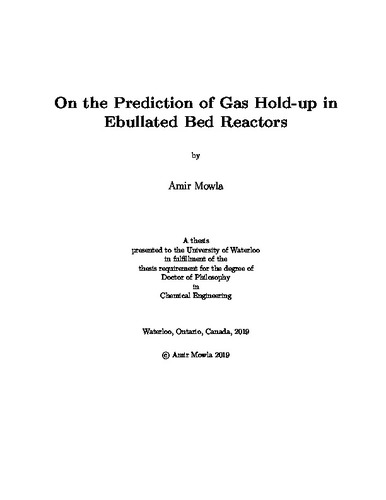 Commercial ebullated bed reactors (EBRs) are three-phase fluidized bed systems used for hydroprocessing (upgrading) of bitumen, a major Canadian resource. The objective of this thesis is to improve the understanding of the hydrodynamics of the EBRs through a combination of experimental investigation and CFD modeling. The experiments were conducted in a transparent cold-flow pilot scale reactor (inner diameter of 15.2 cm and total height of 2.2 m and were focused on the most important parameter in the design and operation of fluidized bed systems, i.e., the overall (average) gas hold-up. The pilot scale setup was operated in both two-phase (gas-liquid) and three-phase (gas-liquid-solid) modes in order to investigate the fluid dynamics in the bed and the freeboard regions present in EBRs. In two-phase flow mode, experiments were performed with and without internal gas/liquid separators (recycle cups connected to a recycle line). The recycle cups were fabricated on the basis of designs proposed in the patent literature using a desktop 3-D printer. Different concentrations of ethanol were added to distilled water in order to reproduce the conditions of high gas hold-up and foaming frequently observed in commercial EBRs. The two-phase systems were also simulated with the Euler-Euler model using a finite volume method in the OpenFOAM toolbox. The average bubble size is a key input to this model and must be representative of the physical system. Provided this condition is met, the Euler-Euler model can predict the average gas hold-up under conditions of homogeneous (dispersed) two-phase flow to within 10% of the experimental values, regardless of the mode of operation (co-current vs. bubble column). Predictions of the gas hold-up under conditions of co-current heterogeneous two-phase flow are, however, less accurate (22% average error) - a result likely linked to limitations of the available empirical swarm correction models. Experiments in the systems with recycle cups showed that the performance of the cups in gas/liquid separation deteriorated in foaming systems. Also increasing the inlet liquid flow rate and/or recycle liquid flow increased the amount of entrained gas in the recycle stream. Simulation of these experiments highlighted the strengths and limitations of the Euler-Euler model. As far as three-phase systems are concerned, a meta-analysis of a large body of published data produced a set of empirical correlations for predicting the overall gas hold-up data for systems operating with water and spherical particles. Experiments conducted to investigate the effect of particle wettability on the gas hold-up in a three-phase fluidized bed demonstrated the limitations of such an empirical approach. For the system operating with hydrophilic particles, gas hold-up values of up to 15% were predicted with less than 25% error by the most accurate correlations. For the system of hydrophobic particles, however, the correlations failed in prediction of gas hold-up and the average error was more than 56%. Experiments demonstrated that rendering the particles hydrophobic decreased the gas hold-up by more than 20%. This was found to be the result of larger bubble size distribution in the bed of hydrophobic particles. In these systems, adhesion of bubbles to particles formed bubble-particle agglomerates with less apparent density than bare particles. Such gas-padded particles have less ability to penetrate and break-up the bubbles. Consequently, the average bubble size was larger in the bed of hydrophobic particles and also in the freeboard region above the bed. According to the semi-empirical models on foam height dynamics, steady state foam thickness is inversely proportional to the bubble diameter. Therefore, foam thickness is expected to be smaller for the system of hydrophobic particles. The foam thickness measurements in this study were consistent with the findings of the semi-empirical models.