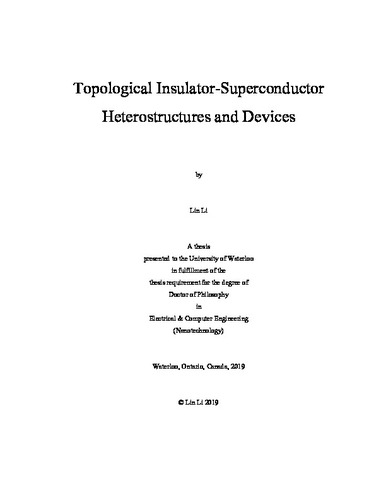 A 3D topological insulator has fully gapped insulating bulk state but a conducting surface. Such conducting “surface” states are formed with helical Dirac fermions, with spin-momentum strictly locked by spin-orbital coupling. When coupled to a conventional s-wave superconductor, the surface state behaves just like the desired p-wave superconductor. It has been predicted that Majorana zero-modes obeying non-Abelian statistics can appear in such a system. Braiding operations on the Majorana zero-modes can realize topological quantum computing that is innately error-tolerant. Therefore, it has boosted extensive interest in the topological insulator-superconductor (TI-S) heterostructures. High quality TI-S heterostructures on wafer size scale is demanded for both fundamental studies as well as applications in the future. The study in this thesis explored molecular beam epitaxy (MBE) growth of TI-S bilayer heterostructures by depositing 3D topological insulator (Bi1-xSbx)2Te3 (BST) on superconductors including Nb and MgB2. The BST-Nb heterostructure has been demonstrated to have high crystalline quality and clear interface. BST-MgB2 heterostructure suffers from chemical reaction happening at its interface, which can be inhibited by lowering growth temperature and prevented by inserting a thin layer of Nb in between to form BST-Nb/MgB2 structure. In addition, by depositing a top layer of Nb on the bilayer heterostructures and proceeding to fabrication, we achieved vertical S-TI-S junctions that have seldomly been studied. Josephson coupling between the two superconducting electrodes and between proximity induced superconducting TI surfaces was observed on the Nb-BST-Nb and Nb-BST-Nb/MgB2 junctions, giving two different critical current transitions on the I-V characteristics. In the Nb-BST-MgB2 junction, tunneling effect through normal electrons was dominating without Josephson current being observed, which is due to an insulating layer formed at the BST-MgB2 interface. Despite the difference in overall conductance features, a zero bias conductance peak (ZBCP) was observed on the dI/dV-V curves from all three kinds of junction. The origin of this ZBCP was discussed. The thin film heterostructures obtained in this project can be good platforms to search for Majorana zero-modes through various approaches. We have also demonstrated the heterostructures are compatible with fabrication processes by patterning vertical junctions. Transport measurement results on these junctions could provide some insight into understanding the physical processes happening at the TI-S interfaces.