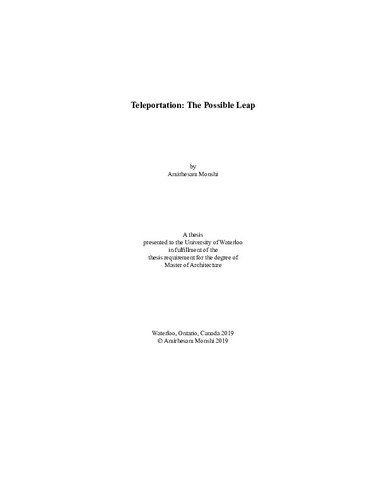 This thesis tells a story, inviting its audience into a parallel world, existing somewhere in my imagination, where human teleportation becomes real and gradually becomes the most prevalent method of transportation. Throughout our speculative travels, we will witness the philosophical, social, political, environmental, and architectural implications of this fantastical technology. Following the tradition of speculative (or visionary) architecture, this thesis seeks to produce criticism of and question the current condition of matters through the speculation of a possible future. To this end, it utilizes teleportation as an exaggerated metaphor for existing or emerging technologies in order to magnify their impacts on our notion of things, environments, as well as our behavioral motifs in both individual and social scale.