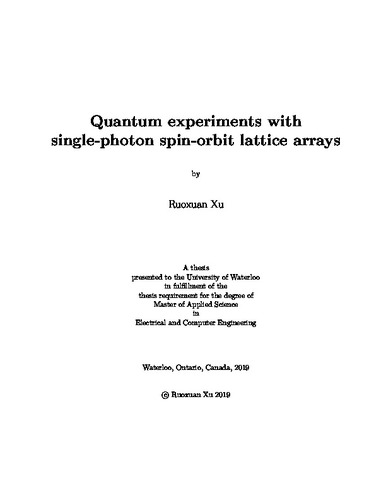 The thesis introduces two single-photon experiments with the lattice of spin-orbit arrays. The basic background knowledge has been introduced in Chapter 1. Chapters 2-4 describe the detailed techniques used in these two experiments. In the first work, we implement a remote state preparation protocol on our single-photon orbital angular momentum (OAM) lattice state via hybrid-entanglement. Remote state preparation is a variant of quantum state teleportation where the sender knows the transmitted state. It is known to require fewer classical resources and exhibit a nontrivial trade-off between the entanglement and classical communication compared with quantum teleportation. Here we propose a state preparation scheme between two spatially separated photons sharing a hybrid-entangled polarization-OAM state. By sending one of the polarization-entangled photon pairs through Lattice of Optical Vortex prism pairs, we generate a two-dimensional lattice of spin-orbit coupled single-photons. We show that the measurement taken by an electron-multiplying intensified CCD camera on the transformed photons can be remotely prepared by the polarization projection of the other. Our protocol could have a significant impact on long-distance quantum communication with higher channel capacity and lead to more efficient and compatible quantum information processing techniques. The second experiment investigates the single-photon Talbot Effect in spin-orbit arrays. The Talbot Effect is a near-field diffraction effect, that occurs with the propagation of periodically structured waves. It has enabled several unique applications in optical metrology, image processing, data transmission, and matter-wave interferometry. We observe that upon propagation, the wavefronts of the single photons manifest self-imaging whereby the OAM lattice intensity profile is recovered. Furthermore, we show that the intensity distribution at each fractional Talbot distance is indicative of the periodic helical phase structure corresponding to a lattice of OAM states. This phenomenon is a significant addition to the toolbox of orbital angular momentum and spin-orbit techniques that are becoming increasingly important in optical implementations of quantum information.