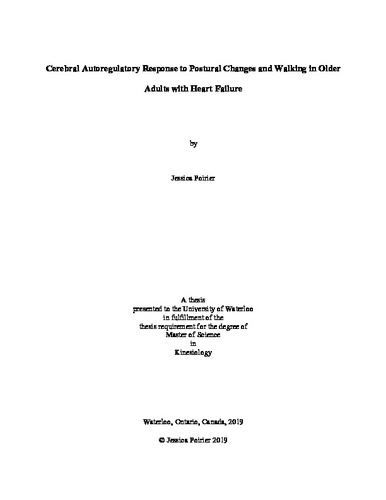 Individuals with heart failure (HF) have reduced cerebral blood flow (CBF) compared to age- matched older adults. This might be related to an impairment in cerebral autoregulation (CA), or an impairment in the CA mechanisms to respond. Previous research has shown impairment in dynamic CA in HF at rest, and during isometric exercise however, the cerebrovascular response to real world conditions, such as transition to upright posture and walking, remains unknown. We recruited 10 individuals with HF and 13 age-matched controls to investigate the effects of posture transitions and walking on the dynamic regulation of CBF in individuals with HF. On a plot of mean flow velocity and mean arterial pressure, we found static CA to be potentially impaired in individuals with HF compared to age-matched controls, when challenged by ambulatory stressors. A potential explanation for the difference observed between groups could be ascribed to lower cardiac output, leading to potential changes in the CA curve, coupled with a greater difference in the CBF response to fluctuations in carbon dioxide throughout standing and walking. Understanding cerebral hypoperfusion and changes in CA may help explain perceptions of fatigue during exertion and elevated rates of cognitive impairment seen in patients with HF. It is equally important to investigate the cerebrovascular effects of exercise training and therapy in the setting of HF therefore, introducing techniques for the assessment of CA into clinical practice should be seen as a priority.