A walk through quantum noise: a study of error signatures and characterization methods 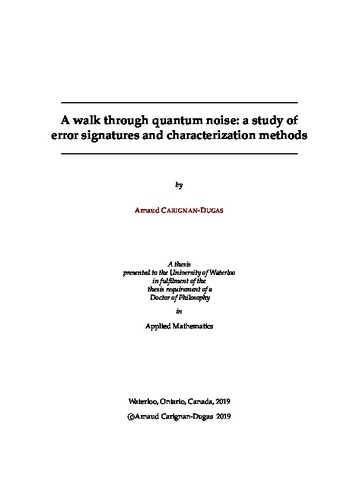 The construction of large scale quantum computing devices might be one of the most exciting and promising endeavors of the 21st century, but it also comes with many challenges. As quantum computers are supplemented with more registers, their error profile generally grows in complexity, rendering the enterprise of quantifying the reliability of quantum computations increasingly difficult through naive characterization techniques. In the last decade, a lot of efforts has been directed toward developing highly scalable benchmarking schemes. A leading family of characterization methods built upon scalable principles is known as randomized benchmarking (RB). In this thesis, many tools are presented with the objective of improving the scalability, and versatility of RB techniques, as well as demonstrating their reliability under various error models. The first part of this work investigates the connection between the error of individual circuit components and the error of their composition. Before reasoning about intricate circuit constructions, it is shown that there exists a well-motivated way to define decoherent quantum channels, and that every channel can be factorized into a unitary-decoherent composition. This dichotomy carries to the circuit evolution of important error parameters by assuming realistic error scenarios. Those results are used to improve the confidence interval of RB diagnoses and to reconcile experimentally estimated parameters with physically and operationally meaningful quantities. In the second part of this thesis, various RB schemes are either developed or more rigorously analyzed. A first result consists of the introduction of “dihedral benchmarking”, a technique which, if performed in conjunction with standard RB protocols, enables the characterization of operations that form a universal gate-set. Finally, rigorous analysis tools are provided to demonstrate the reliability of a highly scalable family of generator-based RB protocols known as direct RB.