Does a sex difference of AMPA receptor trafficking after oxygen-glucose deprivation exist in rat cortical and hippocampal slices? 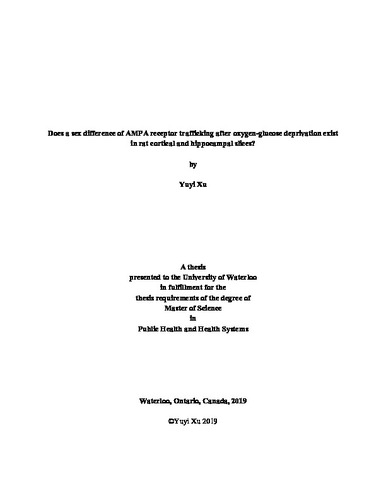 Stroke, which is caused by an interruption of blood supply to the brain, is a major public health burden because it is one of the leading global causes of death and disability. AMPA receptor trafficking is considered to play a vital role in the way cells respond to ischemic stroke, but the underlying mechanisms within different brain regions and between male and female tissue are still unclear. In this study, an acute slice model with a 10 min oxygen-glucose deprivation (OGD) challenge was used to induce dramatic energy and oxygen deprivation and simulate ischemic stroke. A TTC assay was conducted to measure cellular viability after OGD. Surface expression of AMPA receptor subunits, GluA1 and GluA2, was measured under control, or OGD conditions to analyze the pattern of AMPA receptor trafficking. To examine the possible region and sex differences, slices from different brain regions (septal hippocampus vs. temporal hippocampus vs. motor cortex) of each sex were collected. The data were analyzed using a two-way factor, mixed model ANOVA.