“Look at me! Am I a security threat?!”: Border crossing experiences of Canadian dual citizens post 9/11 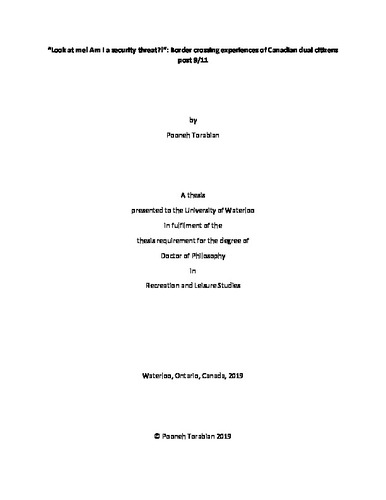 We live in an era in which security politics are generated and sustained by the ‘war on terror’ (Anderson, 2010; Bhandar, 2008; Mueller, 2006). This war often targets mobile people. As a result, security and tourism have become more intertwined with geopolitics and discrimination is a widely-debated feature of the politics of control (Bianchi, 2006). Although it might seem that dual citizenship would lead to the ease of access when it comes to international travel, it is a form of hierarchical citizenship through which only some can benefit (Stasiulis & Ross, 2006). September 11 attacks have highly affected the international travel and tourism practices worldwide. Travelling across or even within borders has become an unpleasant experience for members of minority groups as they may be constantly at risk of facing with different discriminatory actions in the form of xenophobia, racism, and more recently islamophobia (Stephenson, 2006; Stephenson & Ali, 2010). Guided by critical mobilities and intersectionality frameworks, the purpose of this thesis was to explore the border crossing experiences of Canadians dual citizens who have travelled internationally in the post 9/11 era. Critical mobilities accentuates mobilities as a right while highlighting the interplay of (im)mobilities and inequalities. Frameworks highlighting intersectionality consider being raced, gendered, and classed intertwined to illustrate the complexity of the individual’s experiences. This study challenges the idea of freedom of movement as a human right and illustrates the inequalities in terms of accessing international mobilities. The focus of this qualitative research was on the ontological experiences of international travel. I sought to understand what dominant discourses materialize at border v crossings, how these discourses become embodied in travellers’ experiences, and how individuals navigate such discourses. Employing narrative inquiry for the purpose of this research, I used a Foucauldian lens to examine the relationship between the body and the state or politics. Stories of participants revealed that bordering is “selective and targeted” (Rumsford, 2006, p. 164). In line with Muller (2010), I argue that border crossing is “less and less about the line in the sand and more and more about the bodies that cross it – each and every body” (p. 61). Borders are not fixed entities (Donnan & Wilson, 1999; Pickering & Weber, 2006) but are spaces “created and recreated by states and other actors in a way that is fundamentally gendered, raced, and classed” (Pickering & Weber, 2006, p. 12). Mobilities are shaped by one’s gender, race, and class and made manifest through power hierarchies and structures, and reinforced or resisted through agency. This research has developed an argument on how borders are written on human bodies and that bodies carry borders. Through use of critical mobilities and intersectionality as its broader frameworks, this research accentuates mobility as a right while highlighting the interplay of (im)mobilities and inequalities. This study has set the stage for the future tourism and mobilities research by providing discussions on the notions of dual citizenship and freedom of movement and their implications for crossing international borders.