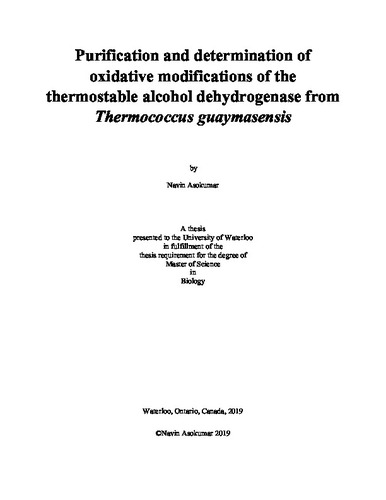 Hyperthermophiles are microorganisms that grow optimally at 80°C and above. They have been found to be resilient to extremes of pH, redox potential, pressure and salinity. Moreover, they can utilize a wide range of carbohydrates as carbon source and produce ethanol as an end product. Alcohol dehydrogenase (ADH) is a key enzyme responsible for alcohol production, catalyzing interconversions between alcohols and corresponding ketones or aldehydes. ADHs from hyperthermophiles are of great interest due to their thermostability, high activity and enantioselectivity. One such zinc-containing homotetrameric ADH from hyperthermophilic archaeon Thermococcus guaymasensis was found to be 39,395.72 Da per subunit in size, with activity of 1,049 U/mg. Regardless of being a zinc-containing enzyme, this ADH was found to lose its activity when exposed to air. Since zinc is a divalent cation which cannot be further oxidized, a plausible explanation would be that certain amino acids, especially cysteines, succumb to oxidative change, leading to the inactivation of the enzyme under aerobic conditions. TgADH has four Cys residues per subunit; Cys39 (which coordinates with zinc), Cys56, Cys212, and Cys305. The recombinant wild-type (45,260.13 Da per subunit) and Cys mutant TgADH were partially purified from recombinant E. coli host using a heat treatment step, with a specific activity of over 300 U/mg. MALDI-TOF mass spectrometry was used for investigating the modifications due to oxidation in the partially purified recombinant wild-type TgADH, when exposed to air. External calibration resulted in an accuracy range of 0.0013 % - 0.19 %. The higher end of the accuracy range was ≈ 145 times more than the lower end, invalidating the method for the required purpose. However, since 0.0013 % of accuracy was seen for Protein A [M+H]+, which has a mass almost equal to recombinant TgADH, and due to the impure nature of the sample, the method was used for analysis of modifications in the recombinant TgADH, without prior digestion of the enzyme. The measured masses of the active and air-oxidized recombinant TgADH were 47 and 12 Da less than reported mass, respectively. The H2O2-oxidized (1:10, 1:40, 1:160, and 1:400 mol/mol protein subunit:oxidant) TgADH were less than reported masses, whereas they should have been more than the reported mass due to the modification(s). Only the 1:1600 mol/mol H2O2-oxidized sample showed an increase of 360 Da suggesting that Cys residues, along with the Met residues were oxidized. The difference between the measured masses of the active and air-oxidized recombinant TgADH was ≈ 35 Da, which is almost equal to two oxygens. However, due to the large discrepancy in the accuracy range it cannot be conclusively said that two oxygens are being added when the enzyme is exposed to air. Enzyme activity analysis of partially purified C212S and C305S TgADH mutants showed no increase in oxygen tolerance compared to the wild-type TgADH. Since previous studies have eliminated the oxidation of Cys56 being the cause for the loss of enzyme activity, this study puts forward the hypothesis that the oxidation of the zinc coordinating Cys residue, Cys39, could be the reason behind the loss of activity under aerobic conditions.