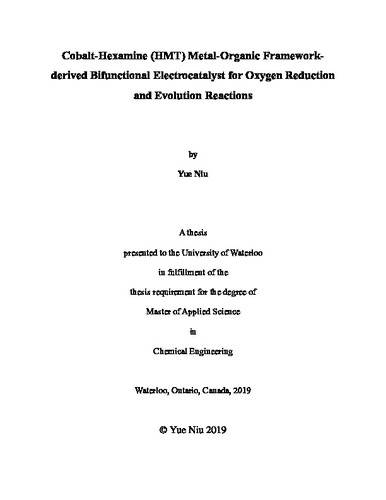 With the high requirement of increasing people’s living standards and building a more sustainable society, electrochemical energy storage devices with large energy density, high power density, and long term durability are greatly needed to mitigate the consumption of fossil fuels. Among all those well-known energy storage systems, zinc-air batteries are one of the most appealing candidates due to sufficient and inexpensive resources applied, promising energy density, as well as the high reduction potential of zinc. However, Zn-air batteries always suffer from relatively high overpotential, which is predominantly originated from the sluggish kinetics of oxygen electrocatalytic reactions. Enormous efforts have been devoted to the development of active bifunctional electrocatalysts for oxygen reduction reaction (ORR) and oxygen evolution reaction (OER). Although noble-metal catalysts, such as platinum, iridium, and their alloys have been proved to own outstanding electrochemical performances for oxygen electrocatalysis, their insufficient catalytic bifunctionality, rarity and high cost hinder the commercial utilization. As a result, the design and synthesis of cost-effective, robust and highly stable bifunctional electrocatalysts to replace noble metal catalysts for zinc-air batteries are greatly desirable to realize the commercialization of Zn-air batteries. In recent years, the metal-organic frameworks (MOFs) are burgeoning as attractive precursors for the fabrication of transition-metal based bifunctional oxygen electrocatalysts with controllable nanostructures due to the structural and compositional advantages of the MOF. Herein, a layered Co-hexamine coordination framework is prepared and used as an efficient precursor to synthesize high-performance ORR/OER bifunctional electrocatalyst featured with cobalt oxide and cobalt phosphide heterostructured structure (denoted as CoO/CoxP).