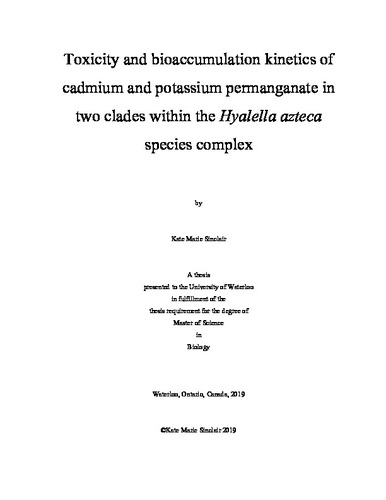 The freshwater amphipod 𝘏𝘺𝘢𝘭𝘦𝘭𝘭𝘢 𝘢𝘻𝘵𝘦𝘤𝘢 has been frequently used in toxicology since the 1980s due to its general sensitivity, ease of culture, and North America-wide geographic range. Over the past 20 years, molecular methods have revealed considerable genetic diversity underlying minimal phenotypic divergence among 𝘏. 𝘢𝘻𝘵𝘦𝘤𝘢 populations, which lead to the recognition of 𝘏. 𝘢𝘻𝘵𝘦𝘤𝘢 as a morphologically cryptic species complex comprised of 85 provisional species. Most Canadian and American toxicology laboratories maintain a single species (clade 8), and the Canada Centre for Inland Waters (CCIW) in Burlington, Ontario appears to be the only lab that cultures a different species (clade 1). Only recently has the impact of species-level divergence within this cryptic complex been investigated to determine the impact on toxicity and bioaccumulation. Differences in ionic requirements, bioaccumulation, and tolerance have been previously demonstrated among clades within this complex. Due to their relative prevalence among toxicology laboratories, research from our group has focused on clades 1 and 8, which were identified with genetic barcoding at the mitochondrial cytochrome 𝘤 oxidase I gene. In the present study, the saturation model was used to estimate uptake and depuration kinetics, short-term bioaccumulation, mortality, and growth inhibition responses of these two clades to cadmium and potassium permanganate. Significant differences between tolerances and bioaccumulation could not be determined in this study because of overlapping 95% confidence intervals, likely due to the low tolerance of the clades to both toxicants. Future research may benefit from comparing the acclimation capabilities of these clades. Reporting in toxicology can be improved by genetically identifying clades, particularly as accessibility to genetic sequencing continues to increase.