Nonlinear Optimal Control of Automated Vehicles in a Connected Environment 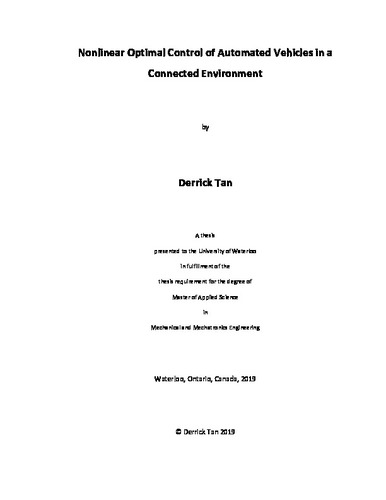 This thesis is based around the University of Waterloo EcoCAR Team (UWAFT) and the EcoCAR Mobility Challenge. The overall objective of the competition is to design and build a hybrid electric vehicle with SAE Level 2 Autonomous capability. The vehicle platform used in this thesis was based on the 2019 Chevrolet Blazer – the vehicle that General Motors has donated to UWAFT as part of the EcoCAR Mobility Challenge. The scope and objective of this thesis is comprised of three parts: First, various vehicle models were considered and developed using MATLAB and Simulink, as well as ADAMS Car. These models were developed and used for the simulation of the vehicle as well as for the development of vehicle dynamics controllers. Second, various control architectures and strategies were developed and evaluated to understand the benefits and limitations of each controller design under varying situations. Controllers for generating viable and optimal paths, as well as controllers for controlling the vehicle to track a path were developed. Third, a visualization framework was developed for streamlining the development of connected and automated vehicle (CAV) systems. Simulation environments for these models were also developed in Simulink (visualized using the Unreal Engine) as well as using ADAMS Car.