"Women Don't Belong to Prison, They Belong to Communities": Governing the Criminalized Mother under the Auspices of Canada's Institutional Mother-Child Program 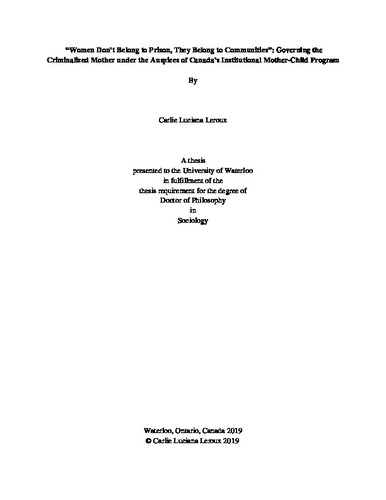 Since its inception in 1996, the institutional mother-child program has suffered from a lack of funding, increased restrictiveness in eligibility for participation, and in some cases has been cancelled entirely. Over the past two decades, the program has been criticized by its supporters for its lack of standardization and rigor and by its opponents because prison is seen as an inappropriate place to raise a child. Mother-child programming represents a highly controversial topic, dividing groups according to how they align themselves with the issues of women's rights, the rights of the child, and public safety concerns. This study explores the relationship between the social welfare and criminal justice systems and the various interpretative frameworks and logics used to govern the incarcerated mother under the program. Specifically, the analysis explores how local service providers at community-based agencies mediate state power and translate program objectives. Furthermore, rehabilitation programs are investigated to identify how incarcerated and formerly incarcerated women are framed in relation to the standard of the “best interests of the child” and the construct of community. Over a two-year period, in-depth interviews were conducted with CSC staff, child welfare, and local community-based organizations across four Canadian provinces and six municipal regions. Broader findings from this study suggest that despite its identification of women’s empowerment as its stated objective, the mother-child program is upheld by a set of logics that generate new modes of exclusion. Three main findings are revealed. First, the way that the community construct is idealized by state and local actors, as empowering and healing, is inconsistent with how criminalized mothers experience community in their day-to-day lives. Secondly, CSC and CPS differ in their interpretation of the “best interests of the child” standard and what that means for program applicants. The deployment of a community standard to assess children’s interest and to evaluate for risk produces tension within the partnership. Third, I uncover that precarious patchwork funding models enhance organizational reputability even though they detract from direct client service with incarcerated mothers, intensifying the exclusion of mothers and their children from accommodation and vital services.