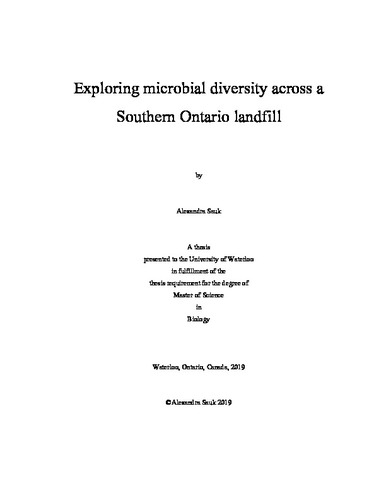 Sanitary landfills are highly engineered environments that receive a heterogeneous mixture of organic waste, metals, and plastics. Global waste production continues to grow every year and waste management is an increasing environmental and financial concern for municipalities. Over the last 50 years, many municipalities have improved recycling efforts and hazardous waste disposal to limit inputs to landfills; however, landfills still contain and receive a number of hard to degrade and/or dangerous materials, including heavy metals and volatile compounds. Conventional landfills are designed to entomb municipal solid waste and prevent its degradation by microorganisms. Despite this engineering goal, waste degradation in landfills via aerobic and anaerobic decomposition by microorganisms actively reshapes the municipal solid waste over time and must be accounted for in landfill design. Our depth of knowledge on the diversity of landfill microorganisms and how this microbial diversity changes across and between landfills is limited. Much of the current research into landfill microbial diversity has investigated specific groups with known functions, such as cellulose degraders, methanotrophs, and methanogens. Recently, research groups have taken a community-based approach to studying landfill microbes, relating community composition to environmental and chemical parameters. Many of these previous studies rely solely on 16S rRNA gene amplicon sequencing for taxonomic identification, which limits functional predictions to what is already known about related groups. Understanding landfill microbial communities and their functions is important for informing waste management practices, and has the potential to reveal novel degradation metabolisms that can be used in waste remediation. This research combines 16S rRNA gene amplicon and metagenomic sequencing to examine the taxonomic and functional diversity of a Southern Ontario landfill and to relate this microbial diversity with site geochemistry. Eight samples were collected from a municipal landfill in 2016 via filtration of the liquid from three leachate wells, two temporal samples of a leachate-collecting cistern (one size-filtered in two fractions), and two groundwater wells from the adjacent aquifer. The DNA for all eight samples underwent 16S rRNA gene amplicon sequencing by the U.S. Department of Energy’s Joint Genome Institute. In parallel, total community DNA was extracted and then shotgun sequenced by the U.S. Department of Energy’s Joint Genome Institute for six samples, generating assembled and annotated metagenomes. Maximum likelihood phylogenies were inferred from the metagenome-derived 16S rRNA genes and a concatenated alignment of 16 syntenic ribosomal proteins co-located on single scaffolds. Based on a comparison between taxonomy derived from the two phylogenies, high quality metagenome assembled genomes (MAGs), and the 16S rRNA gene amplicon data, 22 bacterial and 2 archaeal phyla were present at >1% relative abundance within at least one landfill sample. The Patescibacteria, Bacteroidota, Firmicutes, and Proteobacteria had the highest relative abundances, whereas most other phyla were present at low abundance, with some fluctuations among sites. Below the phylum level, very few microorganisms were identified across multiple sites, with only 37 of 2989 populations (represented by 16S rRNA exact sequence variants) present in two or more sites. This indicates that, although phylum-level signatures are conserved, individual landfill populations vary widely both spatially and temporally. Three leachate and two groundwater sites had partial or complete volatile and non-volatile compound concentration data, allowing for limited correlation of geochemical conditions and contaminant concentrations to microbial diversity patterns across the landfill. Significant differences in geochemistry exist across the sites, with calcium, iron, magnesium, boron, meta and para xylenes, ortho xylenes, and ethylbenzene concentrations contributing most strongly to site differences. The genera Sulfurovum, Proteiniphilum, and Ferritrophicum are relatively abundant in the amplicon data, and have predicted roles in nutrient and contaminant cycling in the landfill related to benzene, proteins, and iron. Access to more sites with complete geochemistry data is required to allow direct connections to be drawn between microbial populations and site geochemistry. A phylogenetic and metabolic analysis was conducted examining the Tenericutes and Erysipelotrichia, which are related radiations dominated by parasitic and host-associated organisms. Landfill metagenomes allowed reconstruction of 12 Tenericute MAGs distributed within four orders, as well as five MAGs within the order RFN20 that are sister to the Erysipelotrichales. The landfill Tenericutes exhibited small genome sizes below 2 Mb, which is expected for this group, and encode a range of biosynthetic capabilities. Genome features suggest potential lifestyles: free-living, commensal, or parasitic, with the potentially parasitic bacteria showing a greater loss of amino acid pathways. The RFN20 MAGs’ genome sizes are below 3 Mb, closer to the Tenericute than the Erysipelotrichia reference genomes. One RFN20 MAG showed similar metabolic capacities to Dielma fastidious, an Erysipelotrichia species, whereas the other RFN20 MAGs are predicted to be metabolically more similar to the Tenericutes. The reconstruction and analysis of these Tenericute and RFN20 genomes expands our current knowledge of these abundant groups’ potential lifestyles in the landfill, and expands genomic representation of these understudied orders.