A Hydrogen Hybrid Powertrain for the Union-Pearson Railway 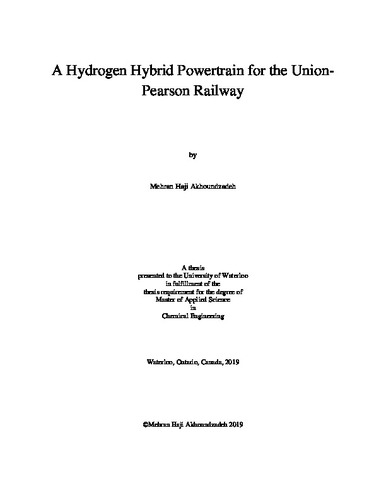 Canadian legislation attempts to regulate particle emissions released from the rail transportation sector. Assessment of the impact of rolling stock is the key to perform such regulations. Different strategies have been proposed to evaluate the health risks of mobile emission sources. Popular methods in measuring health assessment of rolling stock were reviewed in this study. Hydrail was proposed as an alternative option helping Canadian legislation to regulate emission generated from this mode of transportation. The feasibility of developing Hydrail technology is investigated. As a case study, the drive cycle of the DMUs working on the Air-Rail link’s tracks of Great Toronto Area (GTA) was extracted. A theoretical model was implemented to estimate the duty cycle of the train as it was not possible to access the DMU’s throttle data. According to the duty cycle estimator subsystem, the annual emission released from the track is calculated. To assess the health risk on people, 32 places which are located near the track were collected, and the locations were extracted using Google Earth. These places include hospitals, schools, and social community centers. The concentration of three types of pollutants was locally approximated in the 32 places, using Gaussian air dispersion modeling method. To implement the model, commercial software, AERMOD, was used. To contemplate the health effect of the trains, the estimated pollution concentrations were compared with the air quality standards. The Hydrail was introduced as an alternative technology to reduce the health impact of the rail sector. The benefits and drawbacks of the technology were introduced in detail. Finally, a hydrogen powertrain is designed in this study with respect to the estimated duty demand. This should be considered as the first subsystem of an end-to-end Hydrail design platform for this 25 Km long rail route. A frequency-based power management scenario was applied to the developed powertrain to control the power flow between energy sources. A sensitivity analysis was performed to approximate the system dynamics. The proposed power management scenario is capable to optimally keep the system working in its optimal working region whenever it will become integrated with a real-time high-level global optimization subsystem.