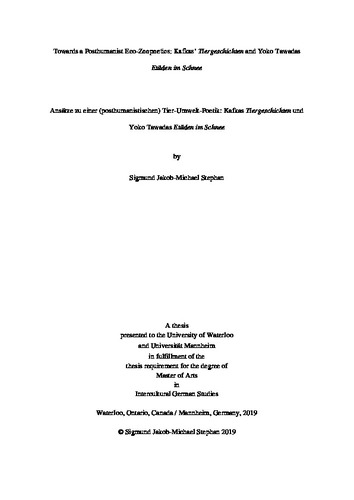 The burgeoning trans-disciplinary field of (post-humanist) eco-zoopoetics is concerned with the question of how the human can represent animals and nature without ignoring their otherness. My thesis argues that literature can help readers to register this alterity by subverting the alleged readability of non-human beings. By doing this, literature sheds doubt on the human as being at the core of an anthropocentric epistemology to whom the world appears to be readable. To prove this, I will employ Uexküll’s Umweltlehre as a paradigm of reading animals and nature to discuss animal protagonists in Kafka’s Tiergeschichten, i.e. Der Bau, Forschungen eines Hundes, and Bericht für eine Akademie, and Tawada’s contemporary novel Etüden im Schnee which evokes Kafka’s animal stories. By showing that these literary texts render their creatures and their nature(s) unreadable in terms of Umweltlehre, I will introduce the Umweltlehre as a key in showing how literature can hint at non-human otherness. Reading Der Bau and Forschungen eines Hunden, the recipients as much as Kafka’s creatures fail to decipher the opaque environments to which the texts expose them even though the creatures and their readers long for it. I have chosen to call their shared futile desire of reading Umweltsehnsucht. The creatures of Der Bericht für eine Akademie and Etüden im Schnee confront the readers with a circus environment which blurs the border between a human and an animal environment. Drawing on the aesthetics of the circus and Foucault’s conception of Heterotopia, I will argue that Kafka and Tawada situate their creatures in the Hetero-Umwelt of the circus which renders its participants unreadable for the observer in terms of homogeneous environments. As a result, the circus creatures can neither be read as humans nor as animals. Instead, the readers can read them as they desire. They can acknowledge or ignore the non-human otherness of the circus creature. The circus appears to be an ambiguous place which can evoke and subvert the infantile desire of its audience to identify itself with the non-human creatures at the same time.