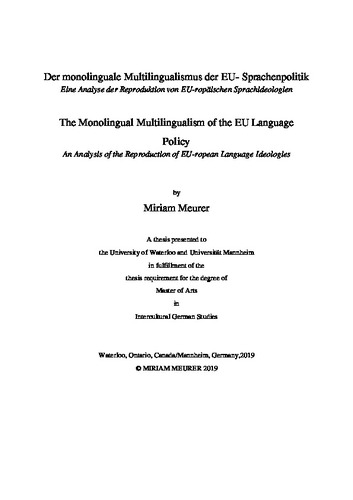 „Das Erlernen von neuen Sprachen öffnet neue Realitäten;“ (BÜNDNIS 90/DIE GRÜNEN, 2018, S. 170) – language acquisition opens new realities – so claimed the election program of the German Green Party for the 2019 European Parliamentary elections. The FDP’s (Free Democratic Party) electoral program also describes multilingualism as a part of Europe that allows us „to enter“ other cultures (FDP, Freie Demokratische Partei, 2019, S. 36). Does language, therefore, act as a key to newrealities and cultures? And why is it that multilingualism is featured in EU election advertisements? In the domain of applied linguistics, multilingualism is an often discussed, variously defined, and controversial topic. Scholars often critique that the concept is based on a state nation construct, and thus supports the structures of the monolingual paradigm. A conceptualized multilingualism based on the monolingual paradigm would imply binary structures and the idea of languages and cultures as homogeneous entities. In this work, I will follow the EU narrative of “Unity in Diversity” to critically examine different conceptions of multilingualism, and to discuss the EU’s underlying assumptions. Here, I will follow the question, why language has such a high value to the EU. Language diversity is outlined in the European Charta for Regional and Minority Languages, which indicates that “regional” languages of a territory, and therefore in this territory “native” languages, are to be protected. These expressions, as well as the usage of multilingualism in European election programs, highlight language as a significant part within the self-conception and legitimacy of the EU. A relevant factor seems to be here the nativity of language. The focus on nativity of languages evokes the appearance of an affinity to native speakerism. This ideology creates a dichotomy of native and non-native speaker, in which the native speaker holds essential superiority and authority about linguistic and cultural capital. This ideology is linked to the monolingual paradigm, which is embedded in the creation of the nation state (Yildiz, 2012). The analysis is based on the hypothesis that EU language policy represents a form of monolingual multilingualism, which affirms and constructs a “native” plurality. The analysis is divided into two parts. In the first part, I examine how the multilingualism celebrated by the EU reinforces the monolingual paradigm. Through the lens of native speakerism, I will analyse the EU’s official website and the European Charta of Regional and Minority Languages according to a critical applied linguistic (Pennycook, 2001). The second part will show how the German parties FDP, AfD, and Bündnis 90 – die Grünen use and interpret these for their purposes. Hereby, I point out that the linguistic ideological self-conception of the EU is reflected in common political debates. The results will show that the nativist approach of the European language policy does not do justice to the plurilingual realities of Europeans and privileges “native” languages over “non-native” languages, and thus underlies neo-racist structures.