Compulsory Fun: Creating Legitimacy through Anniversary Commemorations in the GDR 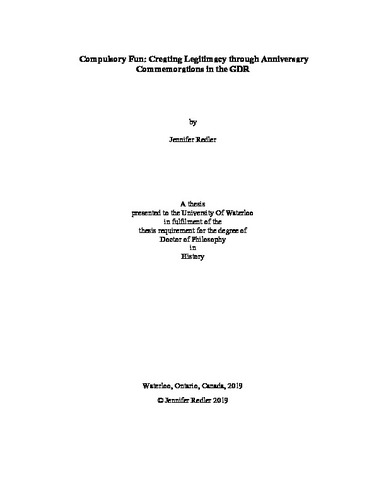 From the state’s founding in 1949, East Germany’s ruling SED engaged in an exhaustive campaign to remove doubts about the country’s legitimacy as an independent state, doubts that not only existed abroad, but also at home amongst its own people. Although the Basic Treaty between East and West Germany in 1972 officially established diplomatic relations between the two countries in 1972, and did much to signal to the world the permanency of the state, the fact that the country abruptly dissolved 17 years later tells us much about the precariousness with which the GDR (German Democratic Republic) had existed. At no time was the GDR’s existence certain, a fact which resulted in persistent efforts by the SED to encourage participation in anniversary commemorations in a desperate attempt to create legitimacy. Using previously untouched archival documents, this dissertation explores three main facets of GDR anniversary commemorations that showcase the ways in which the SED attempted to convince the populace of their vision of a distinct GDR identity. The first and most important facet was the ideological theses the SED issued in honour of a particular anniversary, which not only guided the planning of all celebratory measures, but were also integrated into all cultural events, exhibits, group activities, and festivities themselves. The second facet sheds light on the ways in which national, regional, and local National Front organizations sought to educate the populace on these central anniversary theses by carrying out wide-ranging events, most of which were pedagogical in nature, including lectures, forums, publications, exhibitions, and festivals. The third facet involves the ways in which National Front organizations carried out “socialist competitions” at the national, regional, and local levels during the weeks and months leading up to the anniversary itself. Also vital to understanding these anniversary commemorations are the tensions between centre and periphery, especially the ways in which national and regional National Front committees attempted to work with one another, despite often vast differences in opinion, understanding, and available resources. Ultimately, this dissertation seeks to show that even though the National Front designed the anniversary commemorations to be enjoyable for East Germans, the state nevertheless went to great lengths to promote its monopolistic vision of East Germany. The SED sought to strictly control their message down to the individual East German: once the SED Politburo’s propaganda wing had designed the theses, there was no room for an alternative narrative. While less-than positive opinions often came up in theses discussion forums, local National Front committees sought to counteract them as part of their efforts to convince East Germans of the state’s point of view. In fact, the anniversary commemorations were so ubiquitous that there were virtually endless opportunities for the public to hear this point of view, as each GDR citizen could be simultaneously involved in local, regional, or national events, ranging from sporting events, to workplace competitions, to even neighbourhood and apartment-level street festivals.