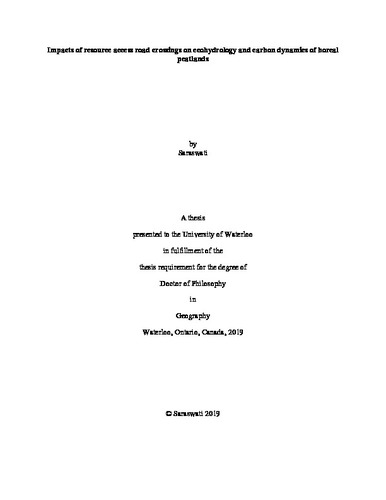 Resource access road crossings are expected to alter peatland ecohydrological properties by obstructing surface and sub-surface water flows, providing favorable conditions to stimulate microbial activity, and ultimately impacting greenhouse gases (GHGs) emissions. A multi-year study at two boreal peatlands (a forested bog and a shrubby rich fen) was conducted near Peace River, Alberta to study the impacts of all-season resource access roads on the local ecohydrology, soil enzyme activities, methane (CH4) emission and carbon (C) dynamics of adjacent peatland. Field measurements (bi-weekly depth to water table (WT), hydraulic head, peat temperature, CH4 flux and CO2 flux, and one-time hydraulic conductivity and peat sampling for enzyme assays, understory vegetation and tree survey, and tree disk/core collection) during the snow free period of 2016 and 2017 were conducted from sampling plots located at road impacted (RI) areas representing: 1) side of the road (upstream and downstream); 2) distance from the road (lateral; 2, 6, and 20 m); and 3) distance from culverts (longitudinal; < 2 and > 20 m). Results showed that the resource access roads disturbed the surface and sub-surface water flow at the bog, but the effect was minimal at the fen as the road orientation was nearly parallel to the flow direction at the fen. At the bog, the shallowest depth to WT position was observed at upstream areas close to the road, when culverts were located > 20 m distance from transects. In contrast, when culverts were present < 2 m from the transects, variation in hydrological conditions between upstream and downstream areas were greatly reduced. The highest enzyme activities in the bog occurred on the downstream side of the road at plots located far from the culvert (> 20 m distance from transects). Two of six investigated enzymes had significantly higher activities in the road impacted areas compared to undisturbed areas, suggesting that road construction may alter organic matter degradation pathways and potentially enhance organic matter decomposition rates. Bog plots located upstream of the road on transects located at > 20 m from culverts and closer to the road emitted significantly more CH4 (124.6 mg CH4 m-2 d-1) than other areas due to shallower water table position and warmer peat temperature. Estimated CH4 emissions from road-disturbed peatlands were 90.8 and 212.2 kg CH4 y-1 for each km of road, in 2016 and 2017, respectively. At the bog, the road impacted (RI) areas were sources of CO2 and understory flux was significantly different than the undisturbed areas in full light conditions. The average tree above ground net primary productivity (NPPag) at the reference areas of both study sites were significantly higher in both years compared to RI areas, respectively. In both study sites, the plots located at vegetation clearance areas were devoid of tree NPPag. Overall, at the bog, the RI areas were sources, but reference areas were sinks of C in both years. In contrast, at the fen, both RI and reference areas were sinks of C in both years. The estimated road induced C losses in 2016 and 2017 were ~ 8.0 and 7.4 Mg C y-1 for each km of the road, respectively. In conclusion, the construction of all-season access roads has the potential to severely impact the local ecohydrology and enzyme activities in peatlands. The road induced CH4 emissions and C losses from adjacent peatlands indicate that road construction across peatlands creates additional sources of anthropogenic GHGs. However, adequate hydrologic connections through culverts and road construction parallel to the water flow when and where possible can minimize the road induced impacts.